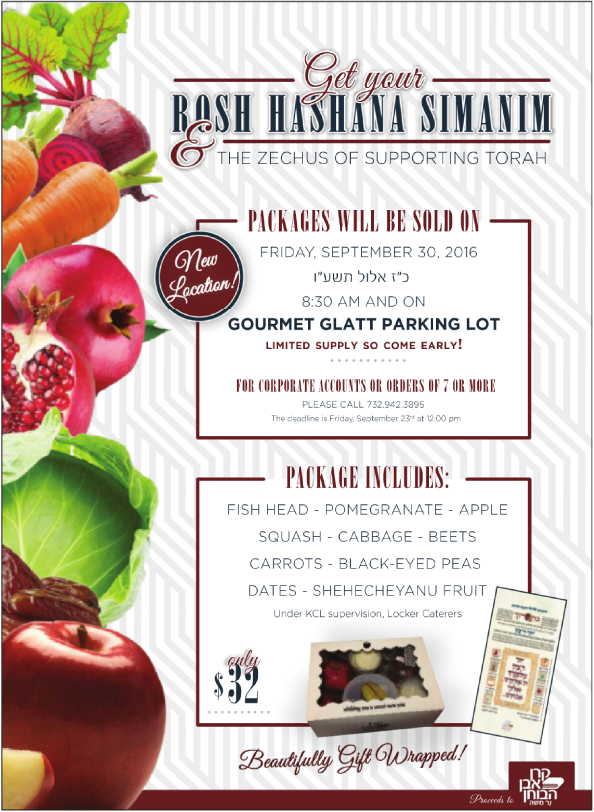 Packages to be Available at New Location on One Day Only

The preparations for Rosh Hashanah are underway. Amongst the many culinary arrangements for the Yom Tov is the preparation of the various simanim foods that are customarily eaten on Rosh Hashanah. Many a housewife has felt that if she could focus on the Yom Tov cooking without having to worry about patchkening with black-eyed peas, tzimmes, squash, fish heads and the other simanim, it would make things so much easier.

For years, Keren Even Habochen Ner Moshe’s simanim packages have been doing just that.

Even Habochen’s creative simanim packages are decoratively designed and include a delicious array of simanim, including an apple, pomegranate, tzimmes (carrots), black-eyed peas, squash, fish head, cabbage, beets and dates. Also included in the package are a Shehecheyanu fruit and a printed card with all the Yehi Ratzons to be said while eating the appropriate foods. No further preparation is necessary. For a donation of $32 to Even Habochen, one can simply pick up a simanim package and place the package in the fridge until Yom Tov. It is as easy as that.

This year, the packages will be available only at the Gourmet Glatt (formerly Shop Rite) parking lot in Lakewood, NJ, tomorrow, Friday, 27 Elul/September 30, from 8:30 a.m. and on. There will be no sales of packages on any other date or at any other location. There is a limited supply.

Keren Even Habochen Ner Moshe is the well-known organized chazarah and bechinah program at Bais Medrash Govoah in which over 600 yungeleit from participating chaburos take rigorous closed-book exams on the material learned each month and are rewarded monetarily, based on the level of their achievements on the exam. The success of the program – which has an annual budget of over $300,000 – is well-known in Lakewood and elsewhere, raising the level of limud haTorah to a new plateau. All proceeds from the simanim packages go directly to benefit Keren Even Habochen.

Even Habochen’s simanim packages are expertly prepared by Locker Caterers, renowned for their delicious and flavorsome food, under strict KCL supervision.

The simanim packages are a great gift opportunity. In the past, many people have chosen to treat their wife, mother, shvigger, sister or friend to the wonderfully prepared and tasty simanim package.