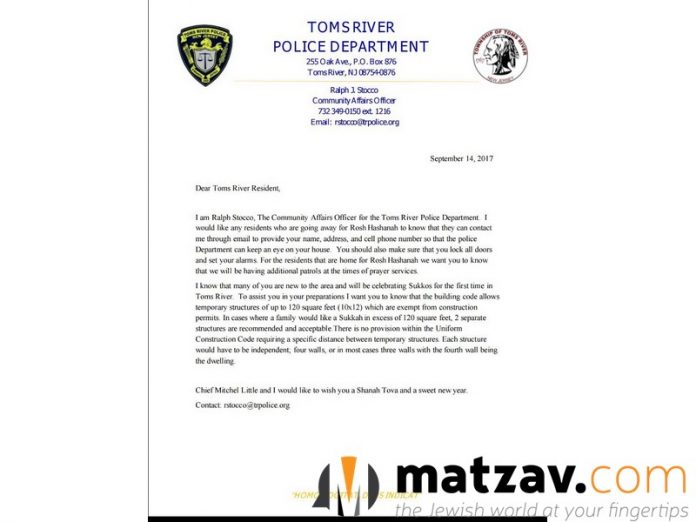 The letter, sent by Toms River police spokesman Ralph Stocco a week before Rosh Hashana, asks the Jews in the community to inform authorities if they would not be home for Yom Tov. In return, the letter said the police would keep an eye out on those homes, ensuring no one takes advantage of the unsupervised properties.

Stocco’s letter upset some of the locals in the town, who felt they were not given similar treatment. On a Toms River Facebook page, one resident asked why the police department had not issued a similar letter before Christian holidays like Christmas or Easter, when many families also are away.

On Tuesday,  Mayor Thomas F. Kelaher  issued a statement to assure residents that Toms River officials are not showing favoritism to Jewish residents. Police would perform similar home checks for any homeowner on vacation, the mayor said.

“Although well-intentioned, the announcement, as worded and publicized, raised concerns that public resources were being used to provide special treatment or a special service not generally available,”  said in a prepared statement that was posted on the township’s Facebook page. “That is categorically not the case.”

“We express regret that any township resident felt excluded or offended by this announcement and reaffirm our unwavering commitment to keep Toms River a strong, vibrant, and inclusive community,” Kelaher said.