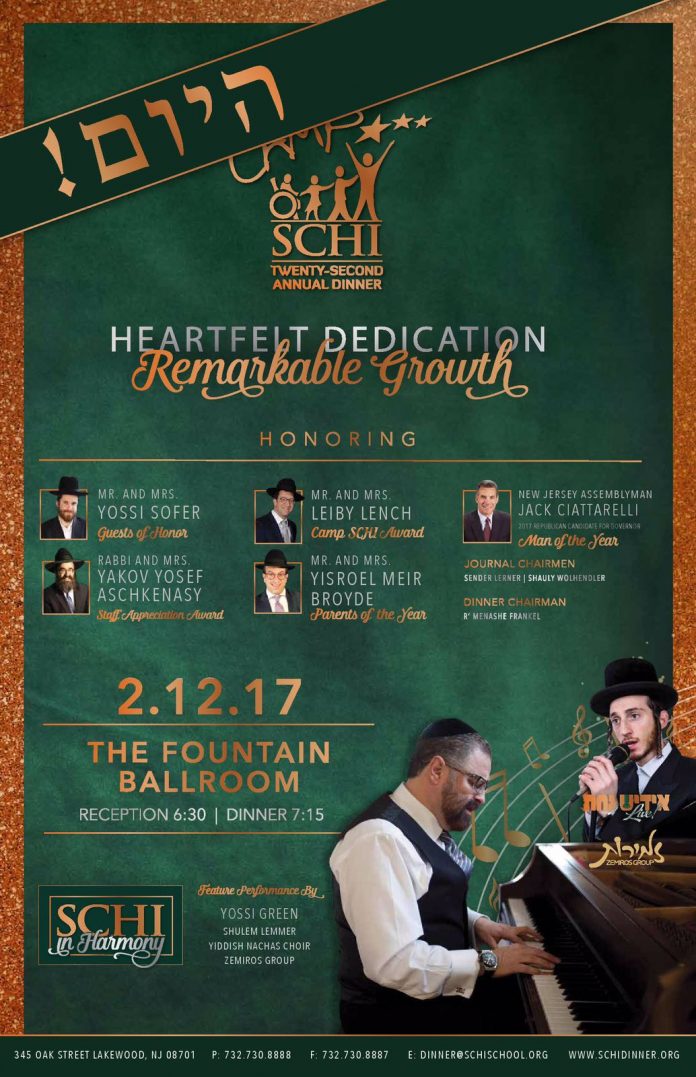 Breaking Barriers for Special Needs Children: SCHI Stops at Nothing

Mrs. O will never forget the day, nine years ago, when her daughter Leba* was born. The doctor came in to deliver a shocking bit of information: The adorable little girl had Down’s syndrome. But he concluded the news with some words of comfort: “Don’t worry, in your community (Lakewood), there is a great network to help you take care of her.”

Now, nearly a decade later – six years after Leba was enrolled in SCHI – those words ring all so poetic in Mrs. O.’s ears. “We would’ve never believed that Leba would be doing all that she is doing now,” she says. “SCHI makes it easier to be a parent of a special needs child in Lakewood than anywhere else.”

Every Child Can Acquire Skills

At the crux of what every parent, staff member and observer raves about SCHI, it’s this: They never, ever, give up on any child.

It may sound like a cliché to some, but at SCHI it’s a reality that guides everything that the world-renowned special needs organization does. “Originally, despite early intervention therapy, Leba wasn’t able to do anything, even make eye contact,” Mrs. O. recalls. “The first year at SCHI, she just cried, but the staff didn’t give up.”

Today, with siyata diShmaya, Leba is a completely different girl. She walks, communicates and is significantly higher functioning across the board than anyone ever dreamt of, and she is constantly progressing even more. Mrs. O believes that the key ingredient –aside from professionalism, innovation, patience and persistence – are the warmth and positivity that permeate SCHI. “There used to be the belief out there that special needs children don’t require the same love and encouragement as other children do,” she says. “At SCHI, there’s so much warmth, and the belief among staff that ‘we’re here for you no matter what.’”

Speak to parent after parent, and you’ll hear the same sentiment. There is nothing that prevents the staff at SCHI from helping each child reach another milestone, even if the milestone would generally be considered unrealistic. No effort is spared. Any expert, from around the world, will be consulted. Any therapy that is found to be successful will be incorporated. As another parent, Mrs. W., summed up, “If a successful method exists anywhere, SCHI has it.”

It begins at the top and filters down to the grassroots level. SCHI was founded by Rabbi Osher Eisemann, an exemplary talmid chochom and yirei Shomayim, for purest of motives: to provide a high level mosad for his own special needs son, Eliezer. His love and respect for these children, and the sincerity of the mission, are exhibited by every staff member, at every step.

When a child is dropped off by a parent at SCHI, staff members are there to warmly greet the child and bring him or her in. There is never even a whiff of despair or hopelessness. Parents walk away from PTA beaming with nachas at their children and their progress. They are secure that the teachers, assistants and everyone else at SCHI is fully devoted to their child’s success, come what may, with full motivation and zero frustration.

“Everyone who works at SCHI, in addition to being a professional, is a special, caring person,” Mrs. O. attests. SCHI parents and staff feel like family, working as a team. Whenever a child succeeds, the staff exhibit a genuine simcha that spills over to the student and his or her family alike.

Life Skills, One Step at a Time

Amidst the myriad cutting-edge equipment and therapies utilized lies a gem that makes a life-altering difference for every SCHI student. It’s called the “Life Skills” program, led by Mrs. Mindy Aschkenasy, who will be receiving, along with her husband Reb Yaakov Yosef, the Staff Appreciation Award at the upcoming SCHI dinner.

Mrs. Aschkenasy became a teacher at SCHI two decades ago and launched the Life Skills program one decade ago along with Rabbi Shaya Benstein. The Life Skills room is set up like a makeshift apartment on the SCHI campus, with a kitchen, dinette, laundry room, washroom and other staples of daily family living. The program has grown and advanced in recent years, complementing the academic and therapy curricula with everyday life skills. Currently, every SCHI student age 6 is included in the program.

The Life Skills room has its own staff, and the students are accompanied by their regular teacher’s assistants. The students are taught an array of life skills, such as brushing teeth, peeling vegetables, sorting laundry, setting the table, mixing macaroni and ketchup, preparing soup and potato kugel, answering the phone, setting an alarm clock, eating with manners, warming up food, breading chicken cutlets, and much more.

When his son came home from SCHI one day showing off the coffee-making skills he learned in the Life Skills program, it moved worlds. The father relayed to the SCHI staff how his entire impression of his son, and Down’s syndrome in general, changed when he saw his son’s discipline and skill. The child was not hapless. Rather, he had the skills and potential to contribute to the household in so many ways.

What’s particularly unique about this program in SCHI, says Mrs. W., is how the staff involve the students, their parents and their siblings in the process, looking at the whole picture and internalizing their feedback. They appreciate the areas in which each student excels, and how each skill contributes to the child’s self-esteem and how appreciated he or she is by siblings and other family members. “My son, who already graduated SCHI,” Mrs. W. relates, “still peels the potatoes for the family every Thursday night. He is so proud of his role in our Shabbos.”

The curriculum of life skills taught in the program continuously evolves and advances, with new skills constantly added.

It is difficult for most of us to appreciate just how difficult and cumbersome it is to teach these skills. Activities that come so naturally to most of us need to be broken down, small step by small step. SCHI staff work painstakingly to teach each step. The students, each at his or her own pace, learn it, practice it, and are filled with satisfaction when they can utilize their new skills at home or anywhere else.

Mrs. Steiner, a Life Skills program staff member, relates that in addition to the conventional program parameters, the children oftentimes get to utilize their skills outside their home and school, giving them an even greater boost in confidence and sense of fulfillment. This includes taking a group of students to a home, and each student fulfilling a different task – the one he or she is best at. Groups of students have also been assigned to undertake major tasks together, such as preparing various local shuls for Shabbos.

The Upcoming Dinner – Celebrating School, Camp and All Else SCHI

“Heartfelt Dedication – Remarkable Growth” is the motto of the upcoming Camp SCHI 22nd annual dinner, which will take place on Sunday, February 12, at The Fountain Ballroom. The dinner will celebrate SCHI’s unique feat of maintaining its “heart” and unshakable dedication, thereby helping students grow and achieve.

In addition to honoring Rabbi and Mrs. Aschkenasy and the Life Skills program, Mr. and Mrs. Yossi Sofer will be the guests of honor, Mr. and Mrs. Yisroel Meir Broyde will be honored as Parents of the Year, and Assemblyman Jack Ciattarelli, New Jersey’s 2017 Republican candidate for governor, will be accepting SCHI’s Man of the Year Award.

Mr. and Mrs. Leiby Lench will accept the Camp SCHI Award, highlighting another special SCHI program. Camp SCHI is located in the Pocono Mountains and offers an exceptional camping program for SCHI students. The grounds are large and tranquil, and the entire camp is geared towards the special needs of its campers, with a nearly one-to-one staff to student ratio, and an array of special equipment. This is in addition to the dozens of SCHI students who get to go to mainstream camps through SCHI scholarships.

The dinner program will include a memorable musical performance by Yossi Green, Shulem Lemmer, the Zemiros Group and the Yiddish Nachas Choir.

Together, SCHI administration, faculty, parents, grandparents, supporters and the community at large will pay tribute to this incredible gem, and help the mosad continue progressing and making a life-altering difference for its hundreds of students. Reflecting the feelings of all of those personally impacted by SCHI, Mrs. O. remarks with palpable emotion, “If you want to be mekarev another Yid, bring them to SCHI. It is a kiddush Hashem that reflects the best of Klal Yisroel, and is a source of pride for all of Lakewood.”

Show your support for SCHI by attending the dinner tonight at The Fountain Ballroom. The reception will get underway at 6:30 p.m., followed by the dinner at 7:15 p.m.