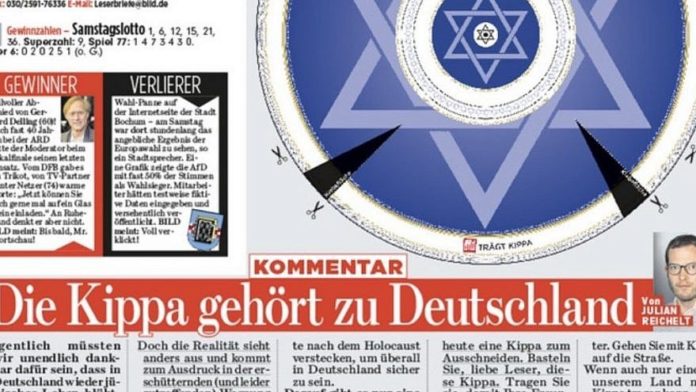 Days after Germany’s anti-Semitism czar said that Jews would be ill-advised to wear kippot in public in some parts of the country, one of the nation’s leading dailies printed a “do-it-yourself kippah” cutout on its front page on Monday as an act of solidarity with the Jewish community.

Ahead of the publication, which occupied about a quarter of the front page, Bild Editor-in-Chief Julian Reichelt wrote: “If only one person in our country cannot wear [a] kippa without endangering himself, the answer can only be that we all wear a kippah. The kippah belongs to Germany!”

In an open letter printed next to the cutout, Reichelt called on Germans to embrace their Jewish compatriots. The paper’s online site also included a video of how to cut out the paper kippah.

The gesture came in reaction to German anti-Semitism commissioner Felix Klein’s interview on Saturday, in which he warned that it was probably too risky to wear a kippah in public in the country.

“My opinion has unfortunately changed compared with what it used to be on the matter,” Klein said. “I cannot recommend to Jews that they wear the skullcap at all times everywhere in Germany.”

He did not elaborate on when and where he thought doing so might be risky.

The remark has drawn mixed reactions in Germany and in Israel.

Israel’s President Reuven Rivlin said on Sunday that he was “shocked” by the statement.