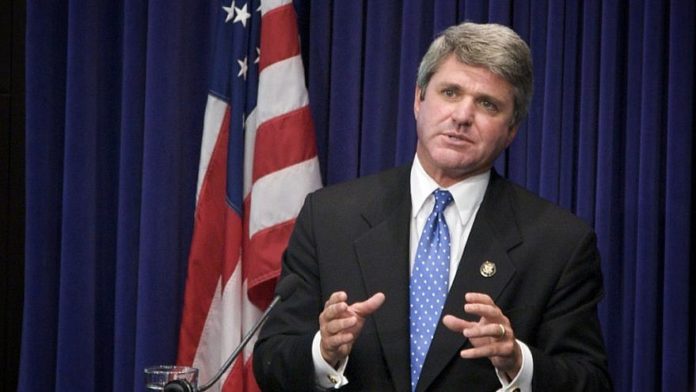 U.S. Rep. Michael McCaul (R-Texas), the ranking member of the House Foreign Affairs Committee, said on Monday that Rep. Ilhan Omar (D-Minn.) should be removed from the committee for her anti-Semitic remarks.

When asked by Michelle Makori of i24 News at the annual summit by Christians United for Israel whether the freshman congresswoman should be kicked off the committee, McCaul said that decision is up to the committee’s chairman, Rep. Eliot Engel (D-N.Y.), and Speaker of the House Nancy Pelosi (D-Calif.)—an answer that elicited jeers from the CUFI crowd before McCaul could finish his answer.

“But as for me, I think Omar has to go,” he said, eliciting wild applause and a standing ovation from the audience.

In February, Omar accused the American Israel Public Affairs Committee, the largest pro-Israel lobbying organization, of paying members of Congress to back Israel.

The following month, she pointed fingers at her “Jewish colleagues” for attacking her and Rep. Rashida Tlaib (D-Mich.) for labeling every criticism of theirs as anti-Israel because of the Muslim faith of the two congresswomen, in addition to slamming her critics regarding “the political influence in this country that says it is OK to push for allegiance to a foreign country.”

This led to a passed resolution condemning anti-Semitism and other forms of hatred that did not call out Omar by name.

In his remarks, McCaul said that the Foreign Affairs Committee “has always been bipartisan on foreign affairs. But it’s also been pro-Israel. And now, for the first time, we have a member on this committee that is not and is making anti-Semitic comments.”

“And then we have Tlaib and [New York Rep. Alexandria Ocasio-Cortez] joining in on the chorus against the Jewish people,” added McCaul. “This cannot stand in the United States of America.”

However, potential removal of Omar from the committee looks unlikely.

“No, I’m not close to it,” said its chairman, Rep. Eliot Engel (D-N.Y.), on CNN’s “Erin Burnett OutFront” in March when asked if he would remove Omar.