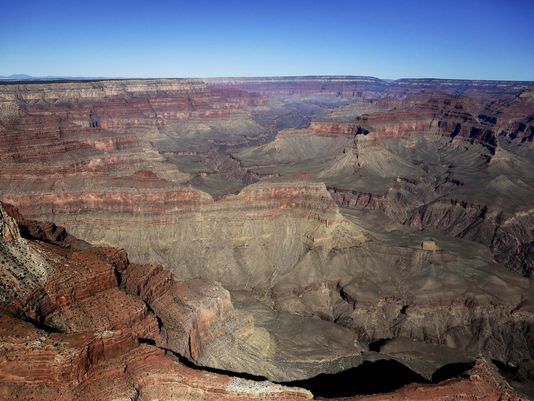 Three people died and another four were rushed to an Arizona hospital with life-threatening injuries after a tour helicopter crashed into a section of the Grand Canyon Saturday evening.

The incident occurred around 5:20 p.m. on the land of the Hualapai Nation near Quartermaster Canyon, Hualapai Nation Police Chief Francis Bradley told the Associated Press.

Photos from the scene showed the charred wreckage of the aircraft, obscured by orange flames and billowing black smoke.

The four survivors were rushed to a hospital as level one trauma patients, the Associated Press reported, meaning they had critical, life-threatening injuries. Updates on their conditions were not available.

Teddy Fujimoto was in the area taking photographs when he heard an explosion, according to CNN.

“I saw these two ladies run out of (the helicopter), and then an explosion,” he said. “One of the survivors … looked all bloody. Her clothes probably were burnt off. The ladies were screaming … It was just horrible.”

Authorities haven’t released the names of any of the people involved in the single-vehicle crash, which remains under investigation by the Federal Aviation Administration and the National Transportation Safety Board. FAA Spokesman Allen Kenitzer said the Eurocopter EC130 crashed “under unknown circumstances” and sustained substantial damage.

The helicopter was owned by Papillon, a sightseeing company that specializes in helicopter tours of the canyon.

No one answered at a number listed for the company.

On its website, Papillon bills itself as the world’s largest aerial sightseeing company, with helicopter tours that take off from Las Vegas and Grand Canyon National Park, including special packages that cater to time-strapped visitors to Las Vegas. Every year, it ferries some 600,000 people on helicopter and other tours. Visitors can land and even dine at scenic viewing areas, or never set foot in the actual desert.

Papillon says its safety regulations exceed those set by the FAA. (The government agency was formed after a 1956 crash over the Grand Canyon killed 128 people.)

The Hualapai, a tribe of some 2,300 members, have leveraged their location at one of the most scenic sites in the world, turning it into an income source for the tribe.

Papillon’s helicopter tours have landing zones on Hualapai lands. The tribe also operates the Skywalk at Grand Canyon West, a horseshoe shaped, glass bottomed projection with stunning, if vertigo-inducing views of the canyon floor. The tribe charges fees for people to enter its land, including sightseeing packages that come with entry to the skywalk, meals at viewing areas and “photo opportunities with Hualapai members.”

The increasing commercialization of the canyon is not without detractors, including many who argue that the constant thump of hundreds of sightseeing helicopters is unwanted noise pollution at what should be a serene, even spiritual place.

“I got up about 6, the sun was just starting to illuminate some of the clouds on the horizon and I’m looking at colors in the clouds and it’s just incredibly quiet and it’s just this extreme Zen experience,” Rich Rudow, a Grand Canyon activist and explorer who’s counted helicopter flights, told the Arizona Republic in a story about the helicopter noise.

“By 7 a.m., just boom! It’s like being hit in the head with a baseball bat … and the whole soundscape in Grand Canyon National Park is just destroyed for miles and mile and miles because of these helicopter operations. There’s no silence from dawn to dusk here anymore.”

Still, unwanted doesn’t necessarily mean unsafe. Even a former critic says Papillon has become a safer company in the past two decades.

Gary C. Robb, a helicopter crash lawyer, represented a woman burned in a deadly crash in 2001. He told the AP the company has made big changes since then.

“They’ve improved their piloting qualifications as well as their maintenance over the last 10 years and as far as I know they’ve not had a crash since 2001,” he said.

But even with the improvements, Robb told the AP, flying in the Grand Canyon can be treacherous simply because of the number of helicopters there.