The live campaign is for this week, the week of Tu B’Av, with dozens of teams undertake to cover the wedding expenses of an orphaned young adult. 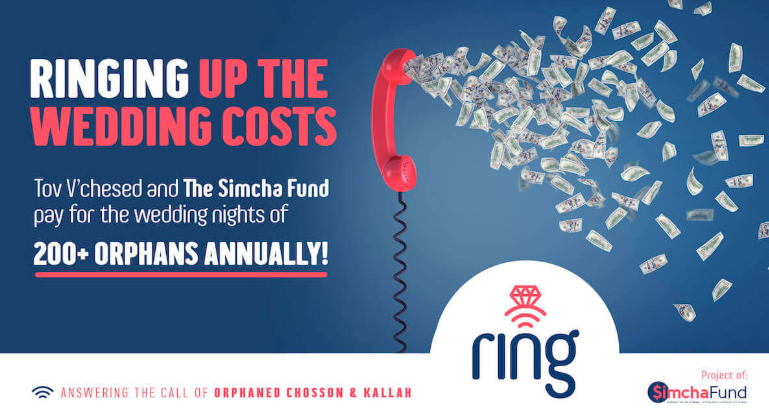 With the launch of the massive RING campaign, the US headquarters of Tov V’chesed are buzzing with a whirlwind of activity as staff, volunteers and fundraisers are hammering out the details of the campaign and working around the clock to ensure the success of this endeavor.

Tov V’Chesed, under the leadership of the renowned man of chesed, R’ Yaakov Eliezer Shisha, has long established itself as Israel’s premier relief organization, servicing the needs of orphaned children and single parent households. Among Tov V’Chesed’s most vital services are the Boneinu and Bnoseinu programs which offer fatherless boys and girls a warm, nurturing environment and trained staff who cater to their emotional needs. Over the years, many Boneinu and Bnoseinu alumni turned to R’ Shisha with a tearful request for wedding assistance. Having gone through a painful childhood, they were finally ready to turn over a new leaf in life but their families’ inability to cover the costs of their wedding night has left them at a loss, dreading what should be the most joyous time in their lives.

In recent years, Tov V’Chesed began responding to their pleas for help with the founding of its now-acclaimed Simcha Fund. Every year, the weddings of hundreds of orphaned young adults are sponsored in their entirety by Simcha Fund and Tov V’Chesed supporters around the world. The costs of over 100 wedding nights annually are covered by the generous support of our larger donors but many more boys and girls in need are waiting to be added to their list.

To that end, Tov V’Chesed and Simcha fund are launching a massive fundraising drive scheduled for the days leading up to Tu B’Av. The campaign, appropriately titled ‘RING’, will see teams from around the world raising the requisite funds to cover the costs of a special wedding night.

In recent weeks, many Yidden around the world readily shared their willingness to lead a team which will raise funds to directly sponsor one or more wedding nights of an orphaned chosson or kallah. Ringing response to the call for assistance with the RING campaign has provided a tremendous boost to the askanim putting in countless hours on behalf of this critical drive.

Many of those who took on to sponsor a wedding night are the families of boys and girls in need of shidduchim who will be utilizing the auspicious time of Tu B’Av to marry off one of Hashem’s children and earn the remarkable guarantee from HKB”H that אם אתה משמח את שלי אני משמח את שלך.  Other teams of donors include those who are about to get married in the coming months, those in need of a yeshua or those who committed to raising money as a zchus for the Neshama of a parent or other family member.

At the request of many donors, the campaign creators added a special feature whereby each team can choose to have their raised funds allocated towards a wedding taking place during a specific week or time of year. While each wedding is special, the allure of sponsoring a simcha at a meaningful time to the donors and raisers has proven to be inviting to countless families.

With the costs of a wedding night in Israel totaling around $7,500, these teams will set up their own page on the main campaign site and with the help of families, friends and associates will raise the requisite funds to directly sponsor a simcha night in its entirety. The chosson and kallah will receive the names of the sponsors so that they can have them in mind under the Chuppah and pray on their behalf to the chief mechuten at the wedding, the Avi Yesomim himself.

A tremendous zchus for those involved in this mitzvah of hachnasas kallah will be the heartfelt tefilos on the auspicious day of Chamisha Asar B’Av at the kever of R’ Yonasan Ben Uziel in Amukah. A contingency of orphaned boys will travel to the gravesite renowned for being a place of yeshuos for those in need of shidduchim or other heavenly support. Members from Tov V’chesed along with the  children will pour their hearts out on behalf of those coming to the assistance of Hashem’s orphaned children by donating to this critical fundraising drive.

Even in the middle of the live campaign, Tov V’chesed will continue processing the applications of many more families, individuals and teams who wish to have a team of their own during the RING campaign. It is expected that now, during the campaign, more ba’alei chesed will choose to be part of this extraordinary movement and grab a spot in this ring of chesed.

At the same time, members of the community are readying to support their friends and family who have committed to marrying off a yasom or yasomah. Even though the wedding will be thousands of miles away, the sponsored wedding will be treated as a true family simcha where everyone will participate and be a part of realizing the dream of marrying off a child of Hashem with dignity and joy.

Give them your ringing support!