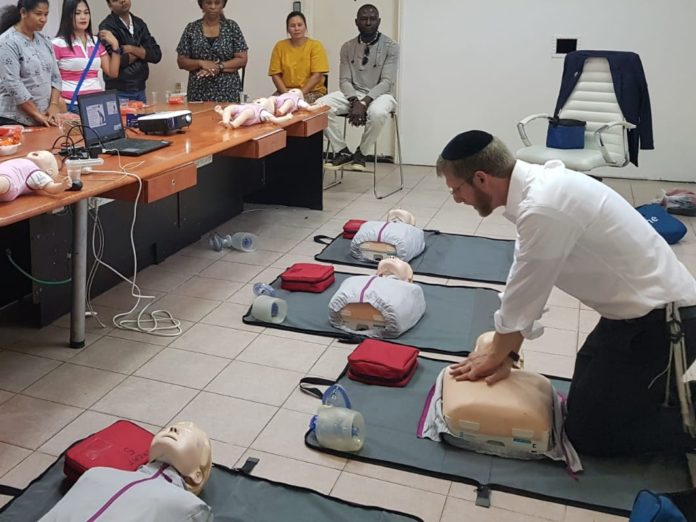 A new project has been created by United Hatzalah, together with Hakeren, the Israel Foreign Workers Fund, that will significantly contribute to saving more lives. The project aims to train foreign workers located in Israel who work in the field of geriatric and home care, to provide immediate first aid treatment to the people they care for should a medical emergency occur. A second aspect of the training course, which began on Sunday in Tel Aviv, teaches the workers, many of whom don’t speak Hebrew, how to speak to medical or emergency dispatchers to effectively communicate the critical information on the phone.

President of United Hatzalah Eli Beer spoke about the reason behind the new project. “This is a group of people whose job definition is to be near sick and elderly people. The segment of the population that requires their services are those who have a high risk of having a medical emergency requiring first aid quickly. We are providing the participants with basic emergency medical training so that they will know what to do if an emergency does in fact occur.”

Rag Wittlefora, a foreign worker from India who participated in the program said: “I think that this course is something that all foreign workers who work with geriatric or ill people should take. We work with people’s fathers and mothers. Our employers are often people who live in various states of medical wellness and sometimes they suffer life-threatening episodes. The information we learned here is very practical and now we know what to do to save a life.”

Beer concluded and said: “We see the job of lifesaving as being relevant to everyone and we are working to train as many people as possible.”

Yossi Koren, Director of Development of HaKeren explained: “These courses are a social initiative of the highest order. They give both the families of those being cared for as well as the employers of foreign workers a sense of security in knowing that the workers will now have the tools to assist in an emergency situation. This course also enables those workers who come from countries that don’t offer the training and makes sure that they are at the same level of ability to handle an emergency situation as those who come with basic CPR and first aid training. Each of the workers receives a basic CPR and first aid certificate that is recognized all over the world. Therefore, even workers whose time in Israel is over will leave with the skills they need to help wherever they go in their next job.”