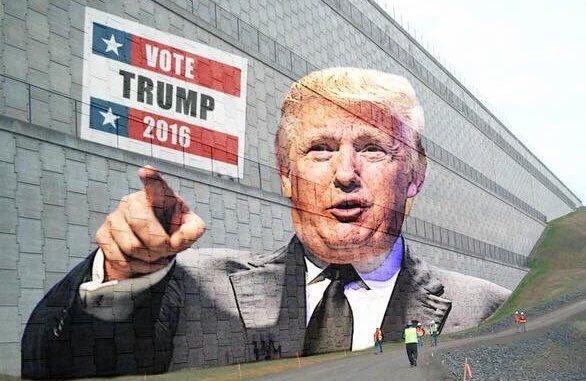 Donald Trump will travel to Mexico City today for a meeting with Mexican President Enrique Peña Nieto, just hours before he delivers a high-stakes speech in Arizona to clarify his views on immigration policy.

Peña Nieto last Friday invited both Trump and Democratic presidential nominee Hillary Clinton to visit Mexico, his office said in a statement provided to The Washington Post on Tuesday night.

Trump, sensing an opportunity, decided over the weekend to accept the invitation and push for a visit this week, according to people in the United States and Mexico familiar with the discussions.

Late Tuesday, Trump and the Mexican president confirmed on Twitter that they will meet Wednesday.

Trump is scheduled to hold fundraisers Wednesday morning in California and deliver his immigration speech in the evening at the Phoenix Convention Center. His trip to Mexico will occur between his events.

The visit will come after Trump has wavered for weeks on whether he will continue to hold his hard-line positions on the central and incendiary issue of his campaign, in particular his call to deport an estimated 11 million immigrants who are living in the United States illegally.

The people informed of Trump’s plans spoke on the condition of anonymity because of the sensitivity surrounding the matter. They said earlier Tuesday that talks between the Trump campaign and Mexican officials were ongoing, with Trump interested in going but with logistics and security concerns still being sorted out.

In addition to vows of mass deportations, Trump has repeatedly promised to build a wall along the U.S.-Mexico border and force Mexico to pay for it. Peña Nieto and other Mexican leaders have dismissed the idea as preposterous.

“There is no way that Mexico can pay [for] a wall like that,” Peña Nieto said in a July interview on CNN, adding that he did not agree with Trump’s frequent characterization of illegal immigrants from Mexico as rapists and killers.

The campaign has spent days dismissing questions about whether Trump’s positions on immigration are shifting, instead emphasizing his commitment to securing the border with Mexico. But the scale and scope of potential deportations remain subjects of intense interest – and Trump is caught between appeasing his staunchest supporters and attempting to appeal to moderate Republicans and independent voters with a softer stance.

Questions about what would become of the estimated 11 million undocumented immigrants if Trump is elected have gone largely unanswered by the candidate and his team in recent days. The campaign has suggested that Wednesday’s speech will address those questions and concerns.

“I expect the speech to be a refinement of the goals he’s always stated,” said Rep. Kevin Cramer, R-North Dakota, a Trump supporter. Cramer said that he would like to see Trump lay out a “chronology” of actions that he would try to achieve. The congressman said he is open to a plan that would afford illegal immigrants who have not committed crimes some form of legal status.

At a campaign stop in Dalton, Ga., on Tuesday, running mate Mike Pence billed Trump’s speech as a chance for the nominee to be highly specific about his plans. Responding to a question about illegal immigration, Pence advised, “Wait about 24 hours; you’re going to hear a lot of details.”

“Don’t miss it. OK? It’s going to be a very important address,” he added later.

Trump has offered glimpses of his policy priorities even as he has skirted questions about their implementation. He remains publicly committed to building the border wall, has extolled the need to crack down on those who overstay their visas and has proposed expanding the E-Verify program, used by employers to determine whether an immigrant is legally able to work in the country. The campaign has also said Trump would prioritize the deportation of criminals, a policy that President Barack Obama’s administration has pursued.

Even with those broad priorities in place, it is unclear how many people would be subject to immediate deportation – all undocumented immigrants, all who have overstayed their visas or just those who have committed serious crimes.

The answers to those questions would define the mandate placed on security agencies such as Immigration and Customs Enforcement.

According to a study by the Migration Policy Institute, an estimated 690,000 undocumented immigrants have significant criminal histories – felony convictions or serious misdemeanors – that make them top priorities for deportation under current administration policy. The number of people prioritized for deportation would grow to about 5.5 million if visa overstays were included, according to some data, although those estimates are not considered very reliable.

Immigration has been at the center of Trump’s brand since he announced his campaign, which he began by railing against illegal immigrants from Mexico. His controversial rhetoric delighted supporters and enraged critics, who accused him of bigotry. As the Republican primary contests unfolded, he vowed to kick out all of the nation’s illegal immigrants and called for a “deportation force” to get the job done.

But since securing the GOP presidential nomination this spring, Trump has had trouble shifting to an effective general-election strategy after dominating the primary race. And he has struggled to prove that he has a sufficient grasp of policy issues to implement his proposals if elected, a weakness that Clinton has repeatedly sought to exploit.

His opaque responses to questions about the implementation of those plans – and about mass deportations in particular – have raised concerns among his most vocal supporters while fueling accusations of hypocrisy from his critics.

The candidate has received a deluge of conflicting advice and perspectives from advisers and supporters.

Former Texas governor Rick Perry said in an interview Tuesday that he and former New York mayor Rudolph Giuliani spent time with Trump last week in Texas and had a long discussion about how to treat undocumented immigrants who have lived in the country for years without incident.

“People who’ve been here for a long period of time, who’ve lived within our laws, who’ve paid our taxes, there is a thoughtful way for those individuals to be here legally, and Donald Trump, I am very comfortable, will find solutions to this issue that has flummoxed Washington and the political class for literally decades,” Perry said.

Mark Krikorian, a hard-line opponent of illegal immigration, said in an interview that he has been troubled by Trump’s recent language because it has echoed viewpoints championed by reform advocates such as former Florida governor Jeb Bush and Sen. Marco Rubio, R-Florida.

“Anything that seems to suggest the kind of guarantee of an amnesty would, I think, as a policy matter be a bad idea – and as a political matter it would be a bad idea,” Krikorian said.

On the potential trip to Mexico, Trump’s newly installed campaign chief executive, Stephen Bannon, played a key role in the discussions while the candidate met Sunday with his aides and family at Trump National Golf Club in Bedminster, New Jersey, said two people who have been briefed on the campaign’s deliberations.

Bannon, who previously headed the conservative website Breitbart News, made the case to the group that Trump must underscore his populist immigration views in the final weeks of the general-election campaign, perhaps with an audacious gesture.

Peña Nieto’s invitation was brought up, and Bannon said it offered Trump an opening to make headlines and showcase himself as a statesman who could deal directly with Mexico.

Trump was intrigued by Bannon’s proposal and agreed, but not all aides and allies were as enthusiastic, the people said.

Early this week, representatives for Trump contacted the U.S. Embassy in Mexico about his intentions, according to a person in Mexico familiar with the communications between the two camps.