The Trump administration is considering invoking a law normally used to prosecute members of the Mafia to crack down on violent protests gripping the nation.

President Donald Trump has repeatedly criticized the demonstrations and has even dispatched the National Guard and federal agents to help quell the unrest after the death of George Floyd on Memorial Day. Now, the administration is talking about using the Racketeer Influenced and Corrupt Organizations (RICO) Act to prosecute the people behind the protests.

The Daily Beast noted that Acting Homeland Security Secretary Chad Wolf raised the idea during an interview earlier this week.

“Well, this is something that I have talked to [Attorney General William Barr] personally about. I know that they are working on it,” Wolf said. 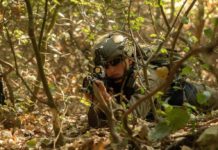