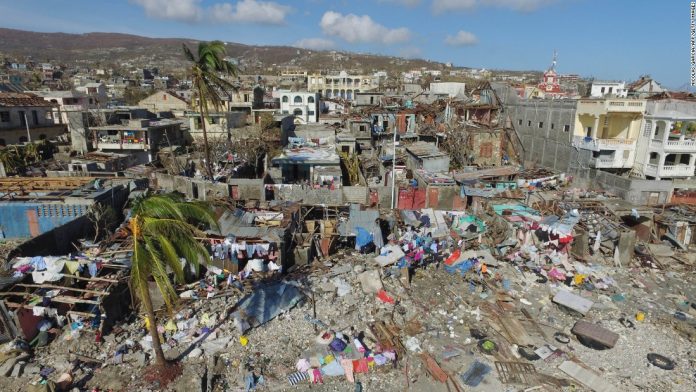 The Trump administration has given nearly 60,000 Haitians with provisional legal residency in this country 18 months to leave, announcing Monday that it will not renew the Temporary Protected Status that has allowed them to remain here for more than seven years.

The decision came after the Department of Homeland Security determined that the “extraordinary conditions” justifying their presence here following a 2010 earthquake “no longer exist,” according to a senior administration official.

“Since the 2010 earthquake, the number of displaced people in Haiti has decreased by 97 percent,” Acting Homeland Security Secretary Elaine Duke said in a statement. “Significant steps have been taken to improve the stability and quality of life for Haitian citizens, and Haiti is able to safely receive traditional levels of returned citizens.”

The 18-month deadline, Duke said, will allow for an “orderly transition,” permitting the Haitians to “arrange their departure,” and their government to prepare for their arrival.

The Haitians are among more than 300,000 foreigners, the majority of them illegal arrivals from Central America, living here under TPS. The designation was created in 1990 to shield foreign nationals from deportation, if the executive branch determined that natural disasters or armed conflict in their countries had created instability or precarious conditions.

Successive administrations have regularly renewed their status, and many have U.S.-born children.

But the Trump administration has repeatedly noted that the program was meant to be temporary, and not a way for people to become long-term legal residents of the United States. Administration officials have said that decisions on further extensions would be made on the basis of whether initial justifications for protection still exist.

Monday’s announcement comports with a broader administration effort to restrict immigration to the United States and increase efforts to expel those who have no permanent legal status.

Earlier this month, the administration announced it would not renew the provisional residency of 2,500 Nicaraguans, and gave them 14 months to leave the United States.

But Duke deferred for six months a decision for the much larger group of 57,000 Hondurans living here under the same designation, saying that more time was needed for consideration. The deferral came after an unsuccessful White House effort to pressure her to end their TPS authorization, officials said at the time.

Both the Nicaraguans and Hondurans have been shielded from deportation since a devastating 1998 hurricane hit those nations.

TPS status for an additional 200,000 Salvadorans, here since El Salvador was struck by a series of earthquakes in 2001, is due to expire in January. They are by far the largest group of TPS recipients.

More than half the Haitians affected by Monday’s announcement live in Florida, where lawmakers had asked that they be allowed to remain. They cited ongoing economic and political difficulties in Haiti, the poorest country in the Western Hemisphere, as well as a still-raging cholera epidemic.

Sen. Marco Rubio, R-Fla., last week publicly called TPS renewal for the Haitians, saying that those “sent home will face dire conditions, including lack of housing, inadequate health services and low prospects for employment … Failure to renew the TPS designation will weaken Haiti’s economy and impede its ability to recover completely and improve its security,” Rubio wrote in the Miami Herald.

Critics of the decision said it does not match the reality on the ground in Haiti.

“It appears ideology won over a practical application of the law,” said Kevin Appleby, senior director of the New York-based Center for Migration Studies.

Rocio Saenz, executive vice president of the Service Employees International Union, which claims thousands of members living here under TPS, called the decision “heartbreaking, and harmful in every way.”

“Besides the human toll on Haitian TPS recipients and their families, it will be costly for their employers, ruinous to the up and coming neighborhoods where they often live, and destablilizing to their countries of origin,” Saenz said.

TPS holders, who include a relatively small number of Africans in addition to Central Americans and Haitians, “have more than 270,000 U.S.-born children,” she said in a statement, “and thousands of grandchildren. After all of this time, no conceivable purpose is served by upending all of that and ordering them to return to some of the most dangerous and precarious countries on earth.”

But the senior official, one of several who spoke to reporters under the condition of anonymity set by the administration, said that “the law is relatively explicit, that if the conditions on the ground do not support a TPS designation, then the secretary must terminate.”

Duke had “assessed overall that extraordinary temporary conditions” that justified the designation in the first place, “had sufficiently improved such that they no longer prevent nationals of Haiti from returning.” the official said.

As the Haitian status was due to expire last spring, then-DHS Secretary John Kelly extended it for six months, saying that conditions might not warrant further extension. Kelly, now White House chief of staff, visited Haiti shortly after that initial announcement and later joined Vice President Mike Pence for a meeting in Miami with Haitian President Jovenel Moise.

Duke, in her statement, said that she met recently in Washington with Haiti’s foreign minister and the Haitian ambassador to the United States, and consulted other U.S. government agencies.

“In 2017 alone,” Duke said, “U.S. Citizenship and Immigration Services conducted extensive outreach to the Haitian communities throughout the country.” Florida Sen. Bill Nelson, D, hosted a meeting last week with Duke to which all members of the state’s congressional delegation were invited.

Days before the Nicaraguan and Honduran decisions were announced, Secretary of State Rex Tillerson informed Duke that the State Department assessed that TPS was no longer necessary for the Central Americans or Haitians.

The senior official who briefed reporters, said that the 18-month “wind-down” period for the Haitians was enough time “to allow families with U.S.-born children to make decisions about what to do, and make arrangements.”

Some immigration experts have speculated that many Haitians are likely to seek residency in Canada, particularly in French-speaking Quebec, to avoid being sent home.