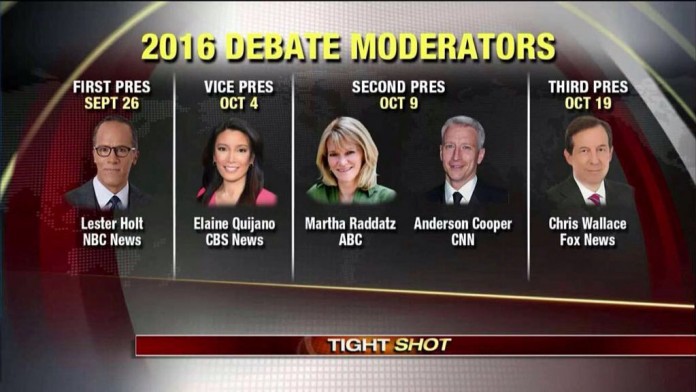 Donald Trump said Monday that he will participate in all three presidential debates, ending lingering questions about whether the GOP presidential nominee would escalate complaints about the debate schedule or moderators.

Trump had previously not committed to participating in the debates, objecting first to the debate dates – which overlap with NFL games – and later saying that he would not agree until the moderators were announced. “I would say that certain moderators would be unacceptable, absolutely,” he told Time magazine last month.

On Monday, Trump said he likes and respects the moderators who have been announced. Committing to participate in the scheduled debates, he said that only natural disasters or other similar crises would prevent him from attending.

“I’ve seen people do so much prep work that when they got out there they can’t speak,” he said.

The first presidential debate will be Sept. 26 at Hofstra University in Hempstead, N.Y. It will be moderated by Lester Holt of NBC News.

On Oct. 9, the second presidential debate will be held at Washington University in St. Louis and will be hosted by Martha Raddatz of ABC News and Anderson Cooper of CNN.

The third and final presidential debate will be held at the University of Nevada in Las Vegas on Oct. 19 and will be hosted by Fox News’s Chris Wallace.