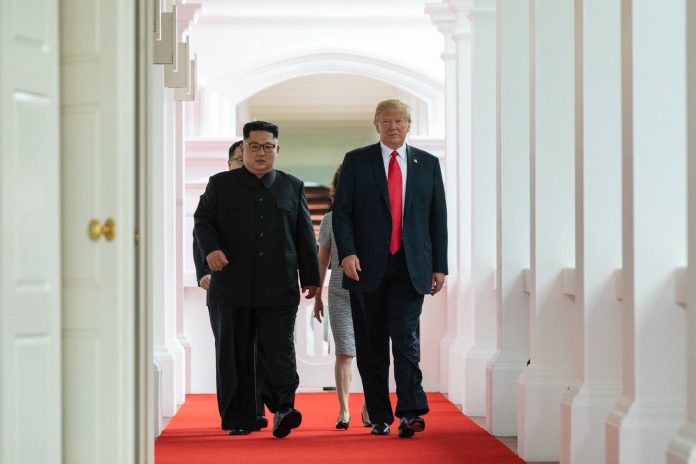 President Donald Trump and North Korean leader Kim Jong Un downplayed expectations of a deal to dismantle that country’s nuclear weapons Thursday, as they kicked off the second day of a two-day summit here.

Sitting beside Kim on Thursday morning, Trump said the pair had enjoyed very good discussions over dinner the night before, with “a lot of great ideas being thrown about,” adding that “importantly, I think the relationship is, you know, just very strong.”

“And when you have a good relationship, a lot of good things happen. So, I can’t speak necessarily for today, but I can say this that, a little bit longer-term, and over a period of time, I know we’re going to have a fantastic success with respect to Chairman Kim and North Korea.”

Trump repeatedly stressed there was “no rush” to make a deal. “Chairman Kim and myself, we want to do the right deal. Speed is not important,” he said.

Asked if he was confident the pair would reach a deal, Kim was equally guarded.

“It’s too early to tell, but I wouldn’t say I am pessimistic,” Kim said in reply to the question from a Washington Post reporter, a rare response from a North Korean leader to an independent journalist. “From what I feel right now, I do have a feeling that good results will come.”

Kim, speaking through an interpreter, also said the whole world was watching them.

“There will be people welcoming our meeting, and people viewing it with skepticism, but there will also be people who will look at us spending a great time together, like a scene in a fantasy movie,” he said.

Asked if he was prepared for the denuclearization of the Korean Peninsula, Kim replied: “If I’m not willing to do that, I won’t be here right now.”

Both Kim and Trump also said they would welcome the idea of setting up a U.S. liaison office in the North Korean capital. Washington does not have direct diplomatic representation in Pyongyang.

On Wednesday night, Trump offered a public embrace of Kim, referring to the brutal authoritarian ruler as “my friend” and stating that he is “satisfied” with the progress of their negotiations.

“Some people would like to see it be quicker. I’m satisfied; you’re satisfied,” Trump told Kim before a private, one-on-one meeting, followed by a social dinner with a small group of aides at the luxurious, five-star Metropole hotel. “We want to be happy with what we’re doing.”

Trump said he believed their first summit, in Singapore, was a success and added that their meetings in Hanoi “will be equal to or greater than the first.” He held up Vietnam as a model for economic growth for North Korea, which he said has “unlimited” potential.

“I look forward to watching it happen, and we will help it happen,” Trump said, sitting next to Kim in front of a row of American and North Korean flags. The president wore a dark suit and striped tie, while Kim wore his traditional Mao-style suit. The North Korean leader smiled as Trump spoke.

On Thursday morning, Trump and Kim arrived in separate motorcades for the second day of summit talks at the hotel. After speaking to reporters seated in front of U.S. and North Korea flags, they strolled briefly through the hotel, pausing to chat briefly with Secretary of State Mike Pompeo and his North Korean counterpart Kim Yong Chol by the pool.

Trump’s warm greeting of Kim on Wednesday night suggested that the president was hopeful that their personal rapport can help bridge gaps in the negotiations among lower-level aides ahead of the summit. Trump said the biggest area of progress since Singapore was their “relationship,” and in a tweet after the dinner he said the two had “very good dialogue.”

The dinner of grilled sirloin and chocolate lava cake was an attempt to continue to foster trust ahead of a series of meetings Thursday during which the two sides will attempt to lock down the terms of an agreement. U.S. negotiators are seeking detailed commitments from Pyongyang to dismantle at least some of its nuclear weapons facilities, while Kim’s regime wants relief from punishing economic sanctions and a declaration to formally end the Korean War.

Kim smiled warmly as the two men shook hands, but looked uncomfortable in the glare of television cameras and the loud clicking of shutters from photographers. He praised Trump for his “extraordinary and courageous political decision” that allowed their reunion to take place after 261 days and hinted that he had his own doubters to overcome at home.

But if there was one thing the two men agreed on, it was that this summit was going to be a success.

“Disbelief and misunderstandings were everywhere, and old hostile habits were getting in our way, but we’ve overcome it well, come face to face and walked all the way to Hanoi in 260 days,” Kim Jong Un said in the photo op with Trump. “I think it’s been a time period that took me more agony, effort and patience than ever. I am confident a great result will be produced this time to be welcomed by everyone, and I will do my best toward that goal.”

White House aides have said the president is determined to sell Kim on a vision of modernization and present him with a choice between continued global isolation or burgeoning economic growth if he gives up the North’s nuclear weapons program.

Ahead of meetings with Vietnamese officials earlier Wednesday, Trump praised Vietnam on Twitter as “thriving like few places on earth” and said North Korea has a chance to do the same “very quickly.”

“The potential is AWESOME, a great opportunity, like almost none other in history, for my friend Kim Jong Un,” Trump wrote. “We will know fairly soon – Very Interesting!”

In brief remarks with Vietnamese President Nguyen Phu Trong, Trump said he marveled at the construction projects his motorcade passed during his drive into Hanoi from the airport late Tuesday.

“Vietnam is thriving,” said Trump, who signed a bilateral trade deal with Hanoi to purchase U.S.-made plane engines and other equipment. Referring to Kim Jong Un, Trump added: “We both felt very good about having this very important summit in Vietnam because you really are an example of what can happen with good thinking.”

Yet Trump at times appeared distracted. Retiring to his hotel for several hours of downtime before his dinner with Kim, Trump unleashed a Twitter broadside on Sen. Richard Blumenthal, D-Conn., mocking him as he has before over questionable statements that Blumenthal has made about his military service.

“I have now spent more time in Vietnam than Da Nang Dick Blumenthal, the third rate Senator from Connecticut (how is Connecticut doing?),” Trump wrote. “His war stories of his heroism in Vietnam were a total fraud – he was never even there. We talked about it today with Vietnamese leaders!”

A readout from White House press secretary Sarah Sanders of Trump’s meetings with the Vietnamese made no mention of them discussing Blumenthal. And Trump’s former personal attorney, Michael Cohen, told Congress on Wednesday that Trump claimed to have a bone spur that won him a deferment from the military draft during the Vietnam War but that Trump provided no evidence of having had a medical problem and privately told him he never had surgery. Trump used another tweet Wednesday afternoon to charge that Cohen is lying.

Trump made his economic pitch to Kim during their first summit in Singapore last summer, showing him a four-minute video produced by the White House that interspersed images with war and destruction with gleaming hyper-modern cityscapes. Kim, in his mid-30s, has said in public addresses that he is focused on improving the North Korean economy, which has suffered under decades of international economic sanctions for the country’s nuclear and ballistic missile programs – and the regime’s corrupt governance.

Analysts have said Trump’s strategy is risky, given that U.S. intelligence officials have said Kim is unlikely to surrender an arsenal that is thought to include anywhere between 20 and 65 nuclear warheads. Although Trump has pointed to a moratorium on testing that has been in place since November 2017, U.S. intelligence has discovered evidence that the North has sought to conceal its weapons programs despite publicly engaging with the United States and South Korea in denuclearization talks.

In another tweet Wednesday afternoon, Trump appeared to take aim at critics who have warned that he could wind up giving unwise concessions to Kim by easing economic sanctions too quickly.

“All false reporting (guessing) on my intentions with respect to North Korea,” the president wrote. “Kim Jong Un and I will try very hard to work something out on Denuclearization & then making North Korea an Economic Powerhouse. I believe that China, Russia, Japan & South Korea will be very helpful!”

Trump administration officials, led by the State Department, have worked over the past two weeks to try to nail down specific commitments from Pyongyang to advance the process, but progress has been slow, according to U.S. and South Korean officials familiar with the talks.

The United States is said to be seeking a detailed timeline and verification process for Pyongyang to close its primary nuclear processing facility at Yongbyon – but North Korean negotiators have resisted agreeing to specifics.

For his part, Kim visited his country’s embassy in Hanoi on Tuesday and later that day met with his advisers at their hotel. North Korea’s state news agency published a photograph of Kim sitting at a hotel room table with four senior aides.

Kim was smoking and had a clipboard on the table in front of him, while the two men and two women were shown listening intently and taking notes. Experts said the report on the meeting was significant in that it implicitly acknowledged this to be a normal negotiating process and showed Kim invested in making the summit a success.

Trump said he would hold a news conference, presumably without Kim, after the summit Thursday afternoon; he is scheduled to depart Hanoi for Washington on Air Force One after that.

Kim is scheduled to remain in Hanoi until Saturday and spend the extra time touring some manufacturing, agriculture and tourism development projects.

“We have a very busy day tomorrow,” Trump said. “A lot of things are going to be solved, I hope.”