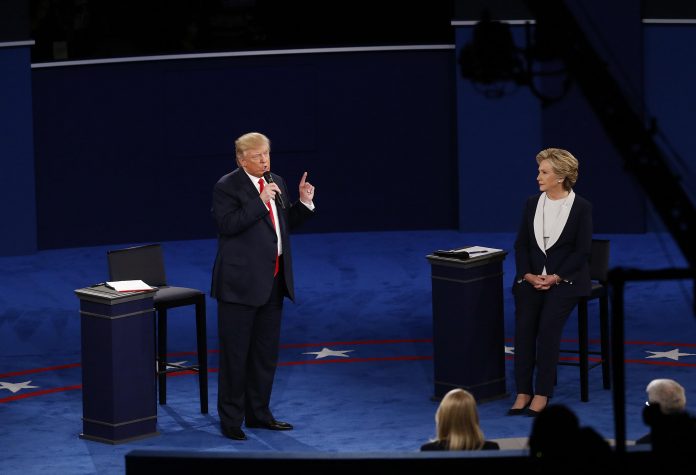 The presidential debate tonight was an especially bitter, boundary-breaking one. At one point in the debate’s last half-hour, Republican nominee Donald Trump accused his rival of having ” tremendous hate in her heart. … She’s got tremendous hatred.”

Trump had Hillary Clinton on the defensive all night, and he took on issue after issue, while Hillary looked tried, worn out, and unable to keep up with the onslaught.

Trump seemed to concede that he had avoided paying any federal income taxes for some recent years, by taking advantage of tax loopholes and a massive $916 million loss he reported in 1995.

“Of course I do. Of course I do,” said Trump, when moderator Anderson Cooper asked if he’d used that loss – first reported by the New York Times – to erase all his federal income tax liabilities. “And so do all of her donors,” he said, referring to large bankroll supporters Democrat Hillary Clinton.

Trump did not provide any details about how many years he had avoided paying income taxes, but affirmed again that he had. “I absolutely used it,” he said, when Cooper asked. Trump also repeated an argument he had made on the campaign trail, that his skillful use of loopholes in the tax code made him best-qualified to eliminate those loopholes. “I understand the tax code better than anybody that’s ever run for president,” he said, and argued that Clinton could not fix the system because of Wall Street donors, and because she had failed to reform the system during her years as a senator and first lady.

Clinton, in her response, argued that Trump would only cement an unfair system in place: “Donald always takes care of Donald, and people like Donald,” she said.

The debate was unusually bitter, with the two candidates taking steps unheard-of in the genteel tradition of Presidential debates – which, typically, are the kind of discussions where “There you go again” is considered a flaming zinger.

In this debate, the two interrupted each other often. Trump referred to Clinton as “the devil,’ and promised that – if elected – he would order the Justice Department to re-investigate her for her use of a private email server to handle government business. Clinton said at one point that Trump lives “in an alternate reality.”

The debate topics ranged from news of the past week as well as stances taken by the candidates over the previous year.

Trump said his proposal to ban foreign Muslims from entering the United States has “morphed,” but the Republican nominee declined to give details about what it had morphed into, during Sunday night’s presidential debate.

“The Muslim ban is something that, in some form, has morphed into an extreme vetting from certain areas of the world,” Trump said, when asked if he had backed off the position.

“It’s called extreme vetting,” Trump said, but did not say much more about how the vetting process would work – or how it would be different from the current methods used to screen immigrants and refugees for terrorist affiliations.

Trump also asserted, once again, that he had opposed the War in Iraq before it began.

“It’s been debunked,” Clinton said, about Trump’s claim to have opposed the war.

“I was against the War in Iraq, and it hasn’t been debunked,” Trump said.

Earlier, in an unprecedented threat during a presidential debate, Trump promised that – if he was elected – he would instruct the Justice Department to investigate his rival.

Trump seemed to be speaking specifically about Clinton’s use of a personal email server to handle government business while she was secretary of state.

His promise to use his executive power to re-open that case, and have it investigated again, was unlike anything in recent presidential debates.

“It’s just awfully good that someone with the temperament of Donald Trump is not in charge of the law in our country,” Clinton said.

“Because you’d be in jail,” Trump said.

The first half-hour of this debate was dominated not by questions from the undecided voters in the audience, but by interruptions and accusations by Trump himself. At one point, Trump referred to the endorsement by Sen. Bernie Sanders (Vt.) of Clinton as a deal with “the devil.”

The debate opened with a question as to whether the campaigns were setting a good example for the nation’s youth, but it quickly turned to discussion about a recent revelation of a damaging video for Trump.

Clinton, in her response, said that she considered Trump different than past Republican nominees.

“I never questioned their fitness to serve. Donald Trump is different,” she said.

For Trump, the stakes for this debate would have been high in any event: He had seen his poll numbers begin to slide after a weak and rambling performance during the first debate in late September.

Trump’s supporters said they were hoping to see a humble, focused performance, in which he could seem contrite about the 2005 remarks, and then move on.

“He has to reach inside himself and realize what he’s capable of doing. He has to live it out, and it’s going to be a uniquely personal moment. No one else can figure it out,” said former House speaker Newt Gingrich, R-Ga.

On Sunday, Trump nailed it. He put on a historic performance, hammering Hillary into submission and winning virtually every exchange.

Trump made clear that he has no plans to back down – and that he intends to criticize Clinton for her treatment of women.

As Trump jetted to St. Louis, Sen. Jeff Sessions, R-Ala., was on the campus of debate host Washington University on Sunday afternoon with his phone to his ear urging fellow congressional Republicans to settle down and stick with the party’s standard-bearer.

“He’s charged up,” Sessions said of Trump in an interview with The Post. “I believe he can turn this around. I think our party leaders need to slow down and give him a chance to make his case.”