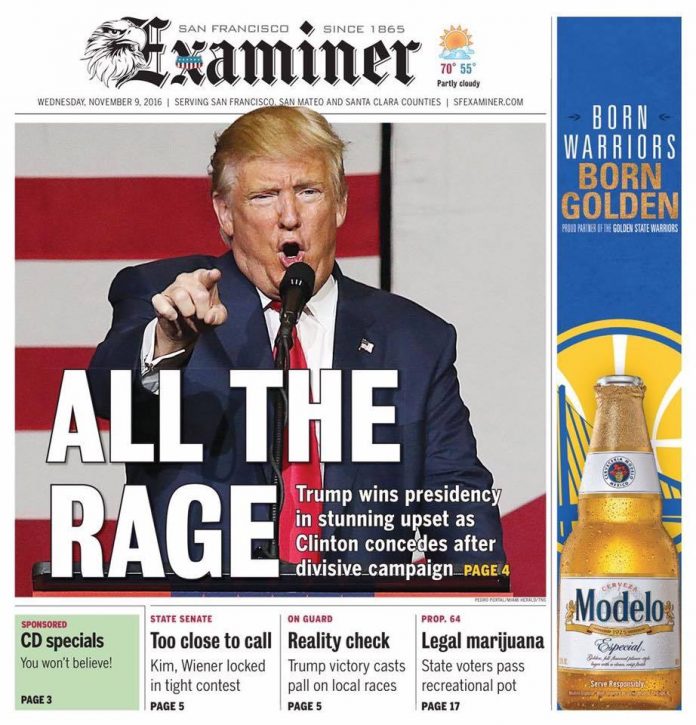 President-elect Donald Trump unleashed a tweetstorm this morning about plans by Hillary Clinton’s campaign to join in the election recount in Wisconsin initiated by Green Party candidate Jill Stein.

Trump had already begun sounding off against the recount efforts late Saturday, when he called them a “scam” by the Green Party to “fill up their coffers.” He also criticized the Democrats for joining the effort.

Just after 7 a.m. Sunday, Trump resumed his criticism, saying that Clinton had conceded the election in her phone call to him before his victory speech Nov. 9 and that nothing would change.

Trump then spent five tweets quoting parts of Clinton’s responses at the third presidential debate, during which she blasted Trump for telling moderator Chris Wallace that he would “keep you in suspense” rather than outright promise to accept the election results.

At the debate, Clinton had called Trump’s answer “horrifying” and “a direct threat to our democracy.”

“Hillary’s debate answer on delay: ‘That is horrifying. That is not the way our democracy works. Been around for 240 years. We’ve had free —

“and fair elections. We’ve accepted the outcomes when we may not have liked them, and that is what must be expected of anyone standing on a –

“during a general election. I, for one, am appalled that somebody that is the nominee of one of our two major parties would take that kind —

“of position.” Then, separately she stated, “He said something truly horrifying … he refused to say that he would respect the results of —

“this election. That is a direct threat to our democracy.’ She then said, ‘We have to accept the results and look to the future, Donald –”

(For the record, Trump’s tweets capture the essence of Clinton’s debate responses but do not quote the full exchange faithfully.)

Trump capped it all off by quoting Clinton’s concession speech and then his signature adjective: “So much time and money will be spent – same result! Sad”

Clinton’s presidential campaign has been quietly exploring whether there was any “outside interference” in the election. A Clinton campaign attorney revealed Saturday that the campaign would participate in the election recount in Wisconsin initiated by Stein.

In a Medium post, lawyer Marc Elias said that the Clinton campaign had received “hundreds of messages, emails, and calls urging us to do something, anything, to investigate claims that the election results were hacked and altered in a way to disadvantage Secretary Clinton,” especially in Michigan, Wisconsin and Pennsylvania, where the “combined margin of victory for Donald Trump was merely 107,000 votes.”

Elias said the campaign had “not uncovered any actionable evidence of hacking or outside attempts to alter the voting technology.” But because of the margin of victory – and because of the degree of apparent foreign interference during the campaign – Elias said Clinton officials had “quietly taken a number of steps in the last two weeks to rule in or out any possibility of outside interference in the vote tally in these critical battleground states.” He said the Clinton campaign would participate in the Stein-initiated recount in Wisconsin by having representatives on the ground monitoring the count and having lawyers represent them in court if needed. And if Stein made good on efforts to prompt similar processes in Pennsylvania and Michigan, Elias said, the Clinton campaign would participate there, as well.