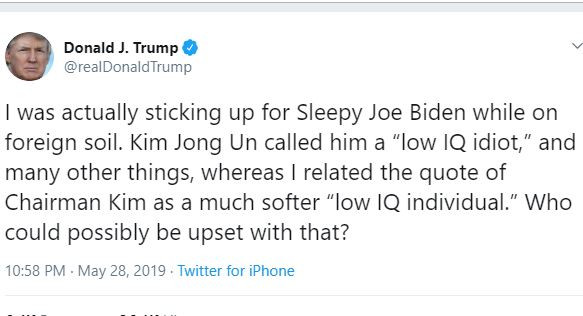 President Trump on Tuesday offered what appeared to be a tongue-in-cheek defense of his criticism of former Vice President Joe Biden while traveling in Japan, which triggered bipartisan blowback against the president.

“I was actually sticking up for Sleepy Joe Biden while on foreign soil. Kim Jong Un called him a ‘low IQ idiot,’ and many other things, whereas I related the quote of Chairman Kim as a much softer “low IQ individual.’ Who could possibly be upset with that?” the president tweeted.

Biden campaign official Kate Bedingfield called Trump’s attacks “beneath the dignity of the office” and said “to be on foreign soil, on Memorial Day, and to side repeatedly with a murderous dictator against a fellow American and former vice president speaks for itself.”