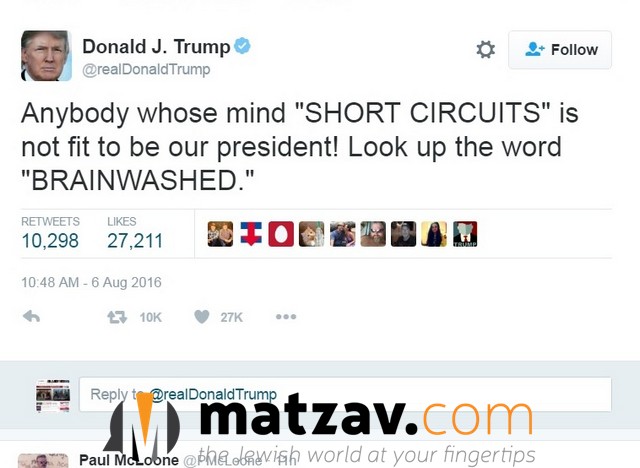 Republican nominee Donald Trump tore into Hillary Clinton today, pointing to an interview with Clinton aired on Erev Shabbos to say the Democratic presidential nominee is “brainwashed” and unfit for office. In comments on Twitter, Trump said, “Crooked Hillary said loudly, and for the world to see, that she ‘SHORT CIRCUITED’ when answering a question on her e-mails. Very dangerous!” he wrote.

Calling Clinton a “pathological liar,” he said, “Anybody whose mind ‘SHORT CIRCUITS’ is not fit to be our president! Look up the word ‘BRAINWASHED.'” Trump also described Clinton as a “security risk.”

Meanwhile, during a campaign rally in Windham, New Hampshire, this evening, he said, “She is a totally unhinged person. She’s unbalanced. And all you have to do is watch her, see her, read about her. She will cause – if she wins, which hopefully she won’t – the destruction of our country from within.”

The GOP presidential nominee called Clinton unstable and incompetent several times throughout the rally. At one point, he also called her “Hillary Rotten Clinton,” a play on her maiden name, Rodham.

Trump said Clinton is a “dangerous liar” and accused her of failing to achieve anything during her long career in public service – except, he said, avoiding criminal charges for using a private email server during her tenure as secretary of state.

The FBI cleared her of criminal wrongdoing after a lengthy investigation but nonetheless sharply criticized her handling of classified information over email. Clinton was blasted by reporters for recently mischaracterizing FBI Director James Comey’s comments about whether her public statements about the emails were truthful. She explained during a question-and-answer session in Washington that she had “short-circuited” when giving the initial response, a phrase which Trump repeatedly parodied today.

“Honestly, I don’t think she’s all there,” Trump told the crowd in Windham.

Trump’s most forceful policy-oriented attack centered on Clinton’s support for the 2003 invasion of Iraq, using her vote as a U.S. senator from New York to call her foreign-policy judgment into question. Trump wrongly claimed, as he often does on the campaign trail, that he did not support the Iraq War. That claim has been repeatedly proved false.