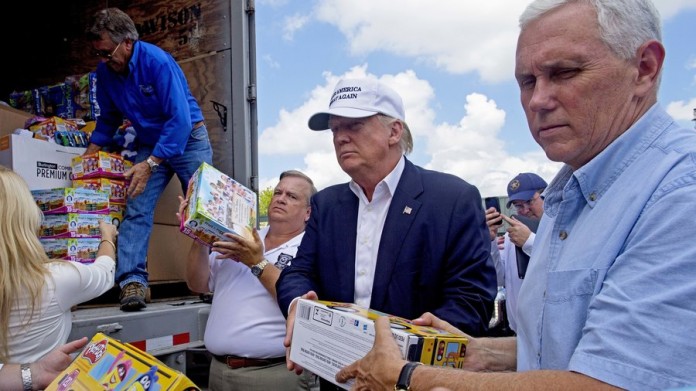 Republican presidential candidate Donald Trump on Friday signed hats and T-shirts for supporters in flood-ravaged Baton Rouge, Louisiana, where he met with victims and response crews at a local church and drove through the city’s damaged streets.

Joined by his running mate, Indiana Gov. Mike Pence, Trump spoke briefly with volunteers and victims at Greenwell Springs Baptist Church before stepping outside to greet throngs of supporters who had gathered outside the security perimeters to see him. Wearing a white “Make America Great Again” baseball cap, he walked over to the crowd as they reached out to grab him and to hand him their hats to sign.

“We knew you’d be here, Mr. Trump! We knew you would be here for us!” one young woman shouted.

“We lost everything but we knew you would come! This makes it all worthwhile,” said another woman.

The visit drew an immediate contrast with President Barack Obama, who has not yet visited the region as it recovers from devastating floods. Conservative critics have pounced on Obama – who declared the flooding a major disaster on Sunday, opening up federal funding for 20 parishes – for not cutting short his vacation in Martha’s Vineyard, Massachusetts., to visit the area. Former House speaker Newt Gingrich, a Trump supporter and longtime Obama critic, praised the trip by Trump and Pence, writing in a message on Twitter: “Sad that Obama [can’t] leave vacation for one day.”

Louisiana Gov. John Bel Edwards, a Democrat, on Thursday said that he preferred that Obama hold off on visiting to avoid diverting resources from recovery efforts. He said Trump was free to come to the state, but added that he hoped the visit was for more than just publicity.

“Gov. Edwards wasn’t informed of the Trump campaign’s visit to the state or the schedule,” his office said in a statement. “We welcome them to Louisiana, but not for a photo-op. Instead we hope they’ll consider volunteering or making a sizable donation to the LA Flood Relief Fund to help the victims of this storm.”

Democratic presidential nominee Hillary Clinton also said she was “closely monitoring” the situation in the flooded areas of Louisiana and Mississippi.

Trump’s visit – and the media coverage that comes with it – comes as people in Louisiana and beyond have questioned why the disaster has not gotten more national media attention. In Baton Rouge, the disaster comes as the city has already endured a brutal summer. Intense protests erupted after a police officer there fatally shot a black man outside a convenience store, and not long after, a gunman shot and killed three police officers on the capital’s streets.

Trump first expressed his condolences for the damage and loss during a campaign event Thursday evening in North Carolina, where he appeared intent on showing a softer side.

“We are one nation. When one state hurts, we all hurt. And we must all work together to life each other up,” Trump said. “Working, building, restoring together. Our prayers are with the families who have lost loved ones and we send them our deepest condolences.”

During that campaign event, he also took the uncharacteristic step of expressing regret for causing “personal pain” with ill-chosen words spoken “in the heat of debate.”

The historic flooding in Louisiana – which the American Red Cross says is the country’s worst natural disaster since Hurricane Sandy in 2012 – has had a staggering impact across the region since more than two feet of rain began falling last week.

At least 13 people have been killed, officials say, while 40,000 homes have been affected. More than 86,000 people have registered for federal assistance. Schools, roads, government offices and businesses have been closed for days, and it remains unclear when some will reopen.

The disaster evoked the specter of Hurricane Katrina, as many who fled New Orleans in 2005 sought refuge in Baton Rouge and rebuilt their lives – only to be chased once again by unceasing, unsparing water.

The Advocate, a newspaper in Baton Rouge, published two editorials this week calling on Obama to visit the area, directly comparing his response to the criticism of the way former President George W. Bush reacted during Katrina.

“We’ve seen this story before in Louisiana, and we don’t deserve a sequel,” the newspaper wrote in an editorial published Friday morning. “In 2005, a flyover by a vacationing President George W. Bush became a symbol of official neglect for the victims of Hurricane Katrina. The current president was among those making political hay out of Bush’s aloofness.”

Louisiana’s governor praised the federal response and defended Obama’s decision to stay away, arguing that a visit would strain resources in an area still responding to what he called an unprecedented disaster.

Obama administration officials have stressed that the federal government is deeply invested in helping Louisiana through the response and recovery. Both W. Craig Fugate, administrator of the Federal Emergency Management Agency (FEMA), and Homeland Security Secretary Jeh Johnson visited the region this week and emphasized that point.

During a briefing Thursday after he toured the impacted area, Johnson said that Obama is “closely monitoring the situation” and “is very much on top of it.”

First responders have begun the painstaking process of going door to door to search for residents and make sure no one else died in their homes, an effort that could last for up to two weeks as officials say they will go through some 30,000 homes and businesses.

Edwards said he has no complaints about the federal response and has spoken to White House officials on a near-daily basis.

Edwards, who was elected last year, pointed out the effort it would take to accommodate an appearance by Obama. He described what unfolded when Vice President Biden came to Baton Rouge last month to attend a vigil for the slain police officers, a trip that shut down interstates and required a heavy contingent of police officers to offer security.

“Quite frankly, that is something I don’t want to go through right now,” Edwards said during a news conference Thursday. “While the president is welcome to visit, I’d rather he give us another week or two.”