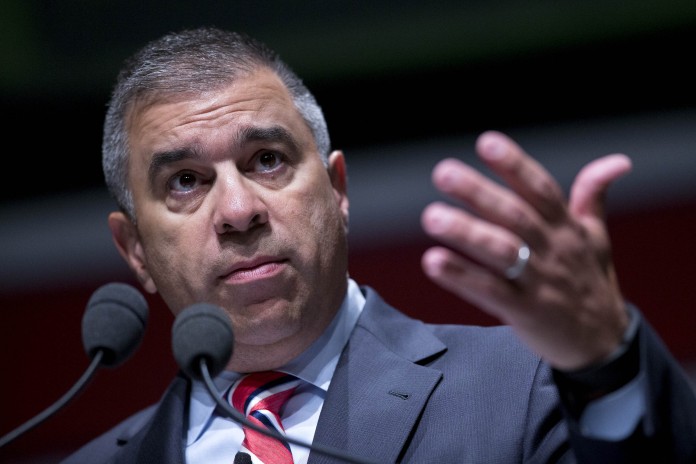 David Bossie, the veteran conservative operative who has investigated the Clintons for more than two decades, has been named Donald Trump’s deputy campaign manager.

The Republican presidential nominee revealed his hire in a phone call with The Washington Post.

“A friend of mine for many years,” Trump said, speaking from his office in New York. “Solid. Smart. Loves politics, knows how to win.”

Bossie participated Thursday in strategy sessions at Trump Tower in New York where he was introduced to campaign aides and Trump associates, according to Trump campaign manager Kellyanne Conway.

Conway said Bossie would be assisting her with managing day-to-day operations and with strategic planning.

“He’s a battle-tested warrior and a brilliant strategist,” Conway said. “He’s a nuts-and-bolts tactician as well, who’s going to help us fully integrate our ground game and data operations, and help with overall strategy as my deputy.”

The addition of Bossie, who first gained notice in the 1990s as the Republican congressional staffer who aggressively delved into the Clintons’ finances and dealings, is the latest sign that the Trump campaign’s new leadership team is embracing right-wing figures whose ties to the party’s elected leadership have been tenuous or even hostile.

Bossie brings long-standing ties with Trump and his inner circle.

He is a friend of Bannon and Conway whose political projects have often overlapped with his own. He is close to the secretive Mercer family, who have funded his organizations and been major backers of Trump’s candidacy.

The leaves three Mercer allies — Bannon, Conway, and Bossie — atop the Trump campaign. Hedge-fund investor Robert Mercer and his daughter, Rebekah, were key figures in urging Trump to reshuffle his campaign this summer.

Until this week, Bossie was president of Citizens United, the hard-line advocacy outfit that has mounted digital, film and advertising campaigns against President Barack Obama’s agenda and against moderate Republicans.

Bossie will take a leave of absence from Citizens United for the duration of the campaign. And he has left the “Defeat Crooked Hillary” super PAC, which he had been running since June.

Citizens United is best known as the orchestrator of the 2010 Supreme Court decision, “Citizens United v. Federal Election Commission,” a historic ruling that ended many restrictions on political spending for corporations and unions.

Citizens United has been one of the main conservative organizations requesting documents from the State Department about Hillary Clinton’s time as secretary and publicly sharing emails it has obtained. A particular focus has been on Clinton’s staff and its communications with her charitable foundation regarding meetings with foundation donors.

Bryan Lanza, a former spokesman at Citizens United, now works as a spokesman for the Trump campaign.

Earlier this year, Bossie was elected Maryland’s Republican national committeeman, giving him a seat on the party’s governing body.

Bossie first began looking into the Clintons as a staffer on the Senate’s special committee on the Whitewater real estate affair. His work there was noticed by then House speaker Newt Gingrich, who approved tapping him to be the chief investigator for the House’s Government Reform and Oversight Committee.

A 1997 profile in The Washington Post described Bossie as a “a barrel-chested, crew-cut, bespectacled guy hanging furtively in the back doorway of a House committee room.” He resigned from his position a year later amid criticism of his practices.

But it was Bossie’s chummy rapport with Trump that sealed his hiring after weeks of talks about the possibility, Trump said.

Wynn introduced Bossie, a Maryland resident, to Trump years ago during a fundraiser for the Children’s National Medical Center in Washington. Bossie and his son, who has endured multiple difficult brain and heart surgeries, have remained in touch with the businessman ever since.

Bossie provided advice to Trump ahead of the 2012 presidential campaign when Trump was flirting with a bid for the White House. Three years later, he was central in recommending Trump’s political hires ahead of the 2016 election, introducing Trump to the campaign’s first manager, Corey Lewandowski, and introducing Bannon to Trump.

There had been deliberation both internally and with party leaders about whether to formally bring Bossie into the campaign, with conversations over whether he was right for the high-ranking post and whether his confrontational style would fit.

While Bossie was open to continuing as an outside supporter of Trump, Trump and his advisers pushed for him to become part of the campaign’s senior staff as the race intensified, Conway said.