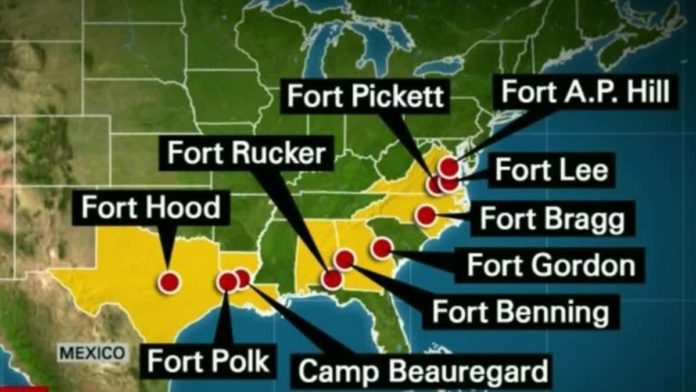 Democrats are challenging President Donald Trump and Republicans over Confederate symbols, with calls to remove statues and rename military bases despite the president’s objections.

The clash comes amid a national reckoning over police brutality and systemic racism sparked by the death of George Floyd, a black man who died in Minneapolis police custody.

Trump’s battle with lawmakers over the naming of U.S. bases after Confederate generals is being waged through the annual military policy bill making its way through Congress.

Trump has promised to veto the entire National Defense Authorization Act if it includes language that would rename the bases – a move that would lead to a host of other consequences, including no pay raises for troops and no funding for new aircraft or ships.

On Wednesday, the Senate Armed Services Committee approved by voice vote an amendment to the defense authorization measure offered by Sen. Elizabeth Warren, D-Mass., that would require the Pentagon to remove the names of Confederate generals from military assets within three years.

Assets are defined as bases, installations, streets, buildings, facilities, aircraft, ships, planes, weapons, equipment or any other property owned or controlled by the Defense Department.

The committee passed the full bill Thursday morning by a vote of 25 to 2, sending it to the Senate for consideration. News of the amendment’s approval was first reported by Roll Call.

On Thursday afternoon, Trump singled out Warren in a tweet in which he called for Republicans to oppose the Massachusetts Democrat’s amendment – even though it had already been approved.

“Seriously failed presidential candidate, Senator Elizabeth ‘Pocahontas’ Warren, just introduced an Amendment on the renaming of many of our legendary Military Bases from which we trained to WIN two World Wars,” Trump tweeted, using a slur alluding to Warren’s claim of Native American heritage. “Hopefully our great Republican Senators won’t fall for this!”

Despite Trump’s call for members of his party to rally to his side, some Republican senators voiced support Thursday for the renaming proposal.

“The message is that if we’re going to have bases throughout the United States, I think it should be with the names of individuals who fought for our country,” Rounds said. “And so I think this is a step in the right direction. This is the right time for it. And I think it sends the right message.”

Other Republicans signaled that they were open to the idea as well.

“I do not think we ought to try to rewrite history,” Sen. Lamar Alexander, R-Tenn., told reporters. “I think it’s always appropriate to review the people and places that we honor to see if they fit the context of the times in which we live.”

Sen. James Lankford, R-Okla., said he hasn’t taken a position on the issue but added, “I think we should actually study it.”

“I don’t think we should ignore that,” he said. “I think we should actually look long-term and what that really means. I’ve been pretty outspoken on things like schools. I don’t think schools should be named after Confederate leaders and generals. You’ve got a role model issue there.”

He added: “And for those that are digging in during the time of Jim Crow, they need to know that time has passed.”

Trump on Wednesday rejected the idea of removing the names honoring Confederate military figures who fought on behalf of preserving the institution of slavery, saying in a tweet that he would “not even consider” changing the names of bases.

Trump’s own defense secretary, Mark Esper, has said he would consider such proposals, and prominent former military figures, including retired Army Gen. David Petraeus, have suggested that such a step is overdue.

“The United States of America trained and deployed our HEROES on these Hallowed Grounds, and won two World Wars,” Trump tweeted. “Therefore, my Administration will not even consider the renaming of these Magnificent and Fabled Military Installations. Our history as the Greatest Nation in the World will not be tampered with. Respect our Military!”

On Thursday morning, he struck a similar theme, tweeting: “THOSE THAT DENY THEIR HISTORY ARE DOOMED TO REPEAT IT!”

“To somehow imply these forts were racist installations and that’s the last thing they saw as they left – many of them lost their life overseas – the president will not stand for that,” McEnany said. “The president will respect this, because these forts and these names are associated with the heroes within them, not the name on the fort.”

Trump’s stance puts him at odds with some members of his own party. House Minority Leader Kevin McCarthy, R-Calif., said Thursday that he is open to the prospect of renaming U.S. military bases.

“We’ll look to see what comes out of the NDAA. I’m not opposed to it, though,” McCarthy said at his weekly news conference.

Rep. Don Bacon, R-Neb., an Air Force veteran, joined Rep. Anthony Brown, D-Md., an Army veteran, to introduce a stand-alone House measure Thursday that would create a process to rename military installations honoring Confederate leaders within a year. According to the lawmakers, there are 10 such bases and facilities.

“As the most diverse and integrated part of American society, it is only right that our installations bear the names of military heroes who represent the best ideals of our Republic,” Bacon said in a statement announcing the move.

Separately, House Speaker Nancy Pelosi, D-Calif., is calling for the removal of 11 Confederate statues from the U.S. Capitol, a process that would involve action by a joint congressional committee and resolutions approved by the states that sent the statues to be displayed.

On Thursday, Pelosi voiced support for removing the statues and renaming U.S. military bases, noting that the nationwide protests in response to Floyd’s death have brought renewed attention to the issue of Confederate symbols. Trump, she said, “seems to be the only person left who doesn’t get it.”

“This is the perfect time for us to move those statues, because other times people may think, ‘Oh, who cares, I never go there anyway. I think they all look alike to me. They’re all these white men there.’ That’s what I think,” Pelosi said. “On the other hand . . . the timing might be just right.”