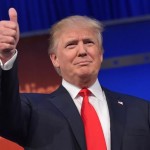 Donald Trump in an interview Wednesday declined to take a shot at President Obama for tearing up talking about gun control on Tuesday.
During a conversation with Fox News, Trump said he believed Obama’s tears were genuine.

Tears rolled down Obama’s face  when he discussed the 2012 mass shooting at Sandy Hook Elementary School, which left 20 young children dead. Obama was giving a speech announcing his new executive action that aims to expand background checks on gun buyers.

Obama did not cry in response to other tragedies. But Trump, who has vowed to reverse Obama’s executive action, said the president most likely “means well.”

“I think he’s incorrect about it. They’re just taking chunks and chunks out of the Second Amendment,” he said. “But I think he probably means well.”

Trump went on to say that mass shootings were the result of a “huge mental-health problem,” not a lack of gun-control measures.