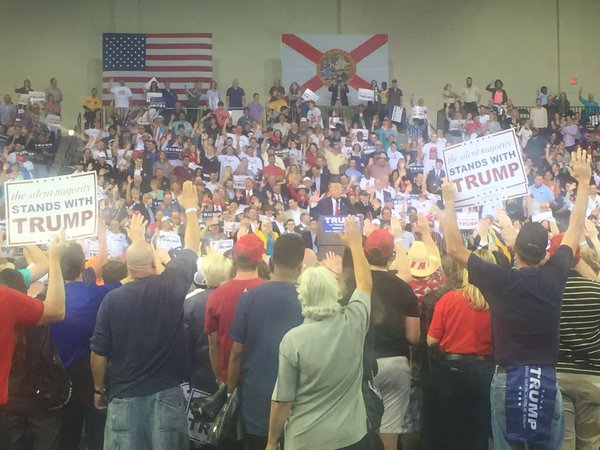 Within minutes of Donald Trump asking thousands of his supporters at a rally in Orlando on Shabbos afternoon to raise their right hands and “solemnly swear” to vote for him, the comparisons were being made.

Taken out of context, photos and video of the pledge looked like a large crowd saluting the Republican presidential front-runner, which was reminiscent to some of Nazis saluting Adolf Hitler. When a Politico reporter asked Trump’s spokeswoman, Hope Hicks, about these comparisons on Saturday, she responded: “What a disgusting thing to ask. A disgrace.”

The comparisons continued on Sunday and Monday, with the Times of Israel publishing an article that quoted former Anti-Defamation League director Abe Foxman, a Holocaust survivor, calling the pledge a “fascist gesture” and saying: “He is smart enough – he always tells us how smart he is – to know the images that this evokes.” That same day, Trump repeated the pledge with rally crowds in North Carolina and Mississippi.

Most presidential campaigns are equipped with “rapid response” teams that are tasked with spotting these sorts of trends on social media before they go viral and are widely picked up by the media. But Trump runs a small shop and usually acts as his own one-man rapid response team, immediately responding to controversy on Twitter. Trump usually seems to have his finger right on the pulse of social media, but in this case it appears that no one briefed the boss before he called into the “Today Show” on Tuesday morning.

“Today’s” Savannah Guthrie brought up Foxman’s comparison to a “Nazi salute” and asked Trump: “I wonder how you feel about that comparison and whether it would make you want to perhaps not do it anymore, if people do feel that way?”

Guthrie asked if Trump would now reflect on it.

“Almost everybody in the room raises their hand,” Trump said. “We’re having a good time. I never knew it was a problem.”

“Today’s” Matt Lauer then jumped in: “I think it’s also in combination, Mr. Trump, with some of the rhetoric you’ve used on the campaign trail over the last several months, targeting groups like Muslims and Mexicans — that evokes images of Nazi Germany and the scapegoating of Jews there back in the 1930s and ’40s.”

“Well, I think that’s a big, big stretch,” Trump said, before again listing off his latest rally crowd counts and saying how much fun his fans have at the rallies. “I’m very surprised to hear it.”

Asked if the comparison bothers him, Trump replied: “If it’s offensive or if there’s anything wrong with it, I wouldn’t do it. But when I say, ‘Raise your hand,’ everybody raises their hand. They’re screaming to me to do it: ‘We want to do it.’ And it’s really — you know, we’re all having a lot of fun. I never thought it was anything offensive.”

Trump closed out the interview by saying that he would look into his use of the pledge at rallies.