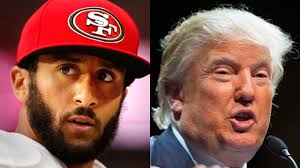 “Maybe he should find a country that works better for him. Let him try. It won’t happen,” said the Republican presidential nominee, who spoke to conservative show host Dori Monson on KIRO radio in Seattle ahead of his Tuesday trip to the region for a fundraiser and rally.

Kaepernick, who has been highly critical of both Trump and Democrat Hillary Clinton, has drawn national scrutiny for his decision to sit during the national anthem before games as a form of protest against what he sees as injustices across the country, including police treatment of civilians.

“I mean, ultimately it’s to bring awareness and make people realize what’s really going on in this country. There are a lot of things that are going on that are unjust, people aren’t being held accountable for, and that’s something that needs to change,” he said Sunday, the San Jose Mercury News reported.

Asked what he would like to see changed, Kaepernick said: “There’s a lot of things that need to change. One specifically is police brutality, there’s people being murdered unjustly and not being held accountable. The cops are getting paid leave for killing people. That’s not right.”

Queried about his decision to spend time in a safely Democratic state like Washington, Trump acknowledged his challenge there, but added: “We seem to have a great receptivity there. We’ve gotten very good numbers from other states where we’re sort of in the same position.”

Most recent polls show Trump trailing Clinton, both nationally and in key battlegrounds.