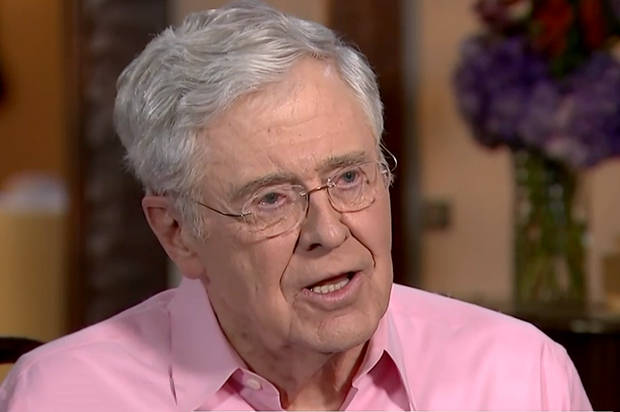 President Donald Trump on Tuesday lashed out at the Koch brothers, saying the conservative political funding network had “become a total joke in real Republican circles” and is “highly overrated.”

The president’s assessment, made in a series of morning tweets, followed a weekend gathering at which top officials affiliated with billionaire industrialist Charles Koch sought to distance the network from Trump and his base in the Republican Party, citing tariff and immigration policies and “divisive” rhetoric out of Washington.

“The globalist Koch Brothers, who have become a total joke in real Republican circles, are against Strong Borders and Powerful Trade,” Trump wrote on Twitter. “I never sought their support because I don’t need their money or bad ideas.”

Trump asserted that the Kochs “love” some of his policies, including tax cuts and conservative picks for federal courts. But he said the Kochs were being driven by a desire to “protect their companies outside the U.S. from being taxed.”

At the weekend gathering of the Koch network in Colorado Springs, officials reiterated their plans to spend as much as $400 million on policy issues and political campaigns during the 2018 cycle.

Earlier this year, they announced heavy spending aimed at helping Republicans to hold the Senate. But in a warning shot at Trump and the GOP, network co-chair Brian Hooks lamented “tremendous lack of leadership” in Trump’s Washington and the “deterioration of the core institutions of society.”

He called out the White House and Trump-allied GOP lawmakers, particularly over trade policy and increased federal spending, and added that “the divisiveness of this White House is causing long-term damage.”

In remarks to reporters Sunday, Charles Koch – now solely at the helm after the retirement of his ailing brother David this year – stopped short of blaming the president personally for the political divisions.

“We’ve had divisiveness long before Trump became president and we’ll have it long after he’s no longer president,” he said. “I’m into hating the sin, not the sinner.”

In reality, the network is expected to be a powerful force for the political right during the midterm elections, particularly in states where Senate Democrats are most vulnerable. It is also heavily backing the confirmation of federal judge Brett M. Kavanaugh to the Supreme Court. Some of the network’s biggest donors and most experienced activists are Trump’s most ardent supporters.