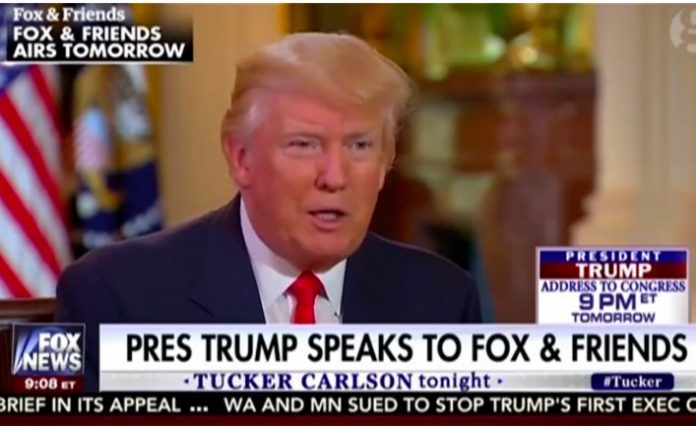 President Trump has been dismissing the protests against his presidency and demonstrations at congressional town hall meetings across the country as concocted by his political enemies. But now he has a culprit: Barack Obama.

In an interview today with Fox News Channel, Trump said that he believes his predecessor is helping to organize the protests.

“I think that President Obama is behind it because his people certainly are behind it,” Trump said. “In terms of him being behind things, that’s politics. It will probably continue.”

Trump made his comments during an interview at the White House with “Fox & Friends” anchors Steve Doocy, Brian Kilmeade and Ainsley Earhardt. Most of the interview will air this morning, in advance of Trump’s formal address to a joint session of Congress.

In the interview, one of the Fox trio told Trump that Obama’s political group – presumably Organizing for Action, the successor group to Obama’s campaigns – was helping to organize activists to demonstrate, and asked the president whether he suspected Obama himself was behind the efforts.

“I think he is behind it,” Trump said. “I also think it’s politics. That’s the way it is.”

A spokesman for Obama did not immediately reply to a request for comment.

In the interview, Trump offered high marks for his accomplishments in the White House, but he gave himself a “C” for messaging, conceding that he has not been able to properly explain what he’s done.