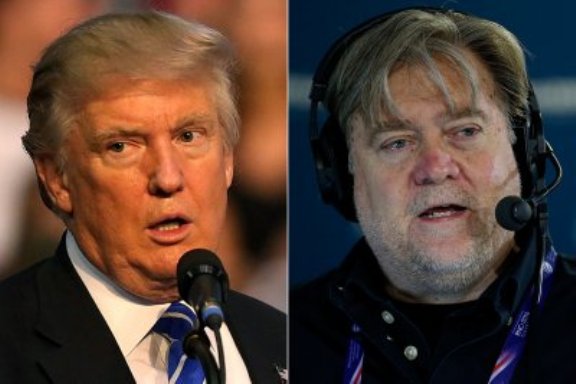 Republican presidential nominee Donald Trump overhauled the leadership of his campaign today, saying he is “committed to doing whatever it takes to win this election.”

Stephen K. Bannon, the executive chairman of Breitbart News and former Goldman Sachs banker, was named chief executive, while pollster Kellyanne Conway was promoted to campaign manager. She joined the campaign in July as a senior adviser.

“They are extremely capable, highly qualified people who love to win and know how to win,” Trump said of Bannon and Conway in a news release.

Paul Manafort, the campaign chairman, is keeping his title.

Manafort was seen as someone who could help guide Trump on broadening his appeal to general-election voters. Trump has shown himself disinclined to cooperate with advisers’ recommendations, however.

“It is imperative we continue to expand our team with top-tier talent,” Manafort said in the news release. “Steve and Kellyanne are respected professionals who believe in Mr. Trump and his message and will undoubtedly help take the campaign to new levels of success.”

Conway is the second campaign manager serving Trump. The first, Corey Lewandowski, was dismissed in June after helping Trump clinch the nomination during a combative primary race.

In March, Lewandowski grabbed a reporter working for Bannon’s Breitbart as she questioned the billionaire after a Florida press conference. A prosecutor later dropped a simple battery charge against him.

Bannon, a major figure in the conservative-media world, played a crucial role in some of the most scathing allegations against Clinton.

A heavily researched book published in May 2015 called “Clinton Cash” was produced by the Government Accountability Institute, which Bannon co-founded and presides over as executive chairman.

The book, which outlined a series of connections between the Clinton Foundation, former President Bill Clinton’s paid speeches, and Hillary Clinton’s decisions as secretary of state, was shared with major news organizations before publication so that they could confirms and expand upon some of the findings.

The New York Times detailed donations flowing to the Clinton Foundation as a uranium deal involving Russia was being approved. Bloomberg Politics reported some 1,100 foreign donors to the foundation who were not disclosed as required by an agreement with the Obama administration.

Despite Clinton’s strength in horse-race polls, she and Trump are about even on the question of trustworthiness. In a Bloomberg Politics national poll conducted Aug. 5-8, 41 percent of likely voters said “trustworthy” better described Clinton and 39 percent said so of Trump. The margin of error was plus or minus 3.6 percentage points.

The poll also found Clinton to be vulnerable on her e-mail practices and her family foundation’s practices when she was secretary of state. Almost six in 10 likely voters, 58 percent, said Clinton’s handling of her private e-mail, which the FBI director called “extremely careless,” bothered them a lot, and another 22 percent said it bothered them a little.

Bannon is temporarily stepping down from Breitbart to work full-time on the campaign “in a new position designed to bolster the business-like approach of Mr. Trump’s campaign,” the news release said. Conway “will work on messaging and travel frequently with Mr. Trump, while working closely with Mr. Bannon and Mr. Manafort on all aspects of the campaign moving forward.”

Conway is among the Trump insiders who have encouraged the candidate to lay blame on the news media, and to pound out the arguments against Clinton.

After the New York Times reported Saturday that people close to Trump and his campaign described him as “exhausted, frustrated and still bewildered by fine points of the political process and why his incendiary approach seems to be sputtering,” Trump fired back in a series of messages to his nearly 11 million Twitter followers.

“The failing @nytimes, which never spoke to me, keeps saying that I am saying to advisers that I will change. False, I am who I am – never said,” Trump said in one message. “If the disgusting and corrupt media covered me honestly and didn’t put false meaning into the words I say, I would be beating Hillary by 20%,” he said in another.