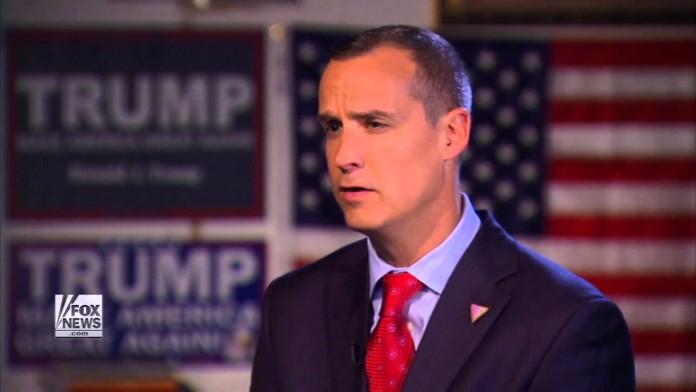 Donald Trump fired his embattled campaign manager, Corey Lewandowski, on Monday as the presumptive Republican presidential nominee struggled to pivot to the general election and his political operation became at times paralyzed by internal feuding.

The dismissal of Lewandowski, a controversial Trump loyalist who chafed at suggestions that the candidate become more presidential, was seen as an effort to calm Trump’s allies, donors and Republican Party officials who increasingly have been alarmed by a recent series of missteps and dramas.

“The Donald J. Trump Campaign for President, which has set a historic record in the Republican Primary having received almost 14 million votes, has today announced that Corey Lewandowski will no longer be working with the campaign,” campaign spokeswoman Hope Hicks said in a statement to the media Monday. “The campaign is grateful to Corey for his hard work and dedication and we wish him the best in the future.”

Lewandowski’s firing, which was first reported by The New York Times, was confirmed by several people with knowledge of the move. Lewandowski did not immediately respond to a request for comment.

Lewandowski clashed internally with Paul Manafort, the campaign’s chairman and senior strategist, and his departure consolidates power around Manafort, a more seasoned operative who has been trying to professionalize the campaign heading into the general election.

Trump was encouraged to part ways with Lewandowski by his three adult children who are involved in the campaign – Donald Jr., Ivanka and Eric – and Ivanka’s husband, Jared Kushner, who has emerged as a Trump confidant, as well as a chorus of allies and other supporters, according to people familiar with the discussions.

“It just came to a head. There were a lot of voices that came together at once,” said one Republican official, who spoke only on the condition of anonymity to speak candidly about the campaign. “They were moving into a general election phase and wanted one coherent management style.”

Former House speaker Newt Gingrich, R-Ga., a Trump supporter who is considered a possible vice presidential running mate, praised Lewandowski for playing a “key role in the most remarkable campaign in modern history.” He said Trump and his team are “rapidly learning the general election, 50 states simultaneously, is a much bigger, more complex system.”

“The general election is like a gigantic football team – it takes a whole different set of requirements both for the candidate and for the team,” Gingrich said in an interview Monday morning.

Lewandowski has been telling people privately that it was opposition from Trump’s children – not Manafort – that ultimately forced him out, according to a second Republican official familiar with the conversations.

“What he is saying to operatives is that the critical mass was finally reached with Trump’s kids,” said the second official, who also spoke on condition of anonymity.

In conversations with Trump aides, the official was under the impression that the Lewandowski move was a “surgical” one, and that other aides loyal to the ousted campaign manager would not be axed en masse. But the question of whether they would want to stick around following his departure was an open one, the official said.

One of Trump’s earliest hires, Lewandowski was an architect of his successful strategy throughout the primaries based on extensive media attention and massive rallies. As his candidate courted controversy, Lewandowski’s mantra was, “Let Trump be Trump.” Lewandowski became a force of personality, building a loyal stable of lieutenants both at national headquarters at New York’s Trump Tower and in states around the country.

But throughout the spring, Lewandowski clashed over strategy and staffing with Manafort, a veteran party operative who, unlike Lewandowski, had experience on past presidential campaigns. The two men formed rival power centers within the campaign. Manafort urged Trump to evolve into a more presidential candidate and tried to professionalize the operation as they moved into the general election phase, but Lewandowski resisted Manafort’s proposed changes.

Since securing the nomination May 3, Trump’s operation has failed to grow to meet the needs of a general election campaign. Key positions, such as communications director, have been left unfilled for weeks. Fundraising has been slow. The campaign is far behind in hiring field staff in battleground states. And while presumptive Democratic nominee Hillary Clinton’s campaign has begun a television advertising blitz in eight swing states, the Trump campaign has not aired a single general election ad.

Trump himself has been under heavy fire in recent weeks for a string of damaging controversies, from his clumsy response to the mass shooting in Orlando to his highly personal attacks against a federal judge overseeing two lawsuits against him, to his campaign’s failure to disburse pledged donations meant for veterans’ charities.

National polling trends have painted a grim picture for the Trump campaign, as a sharp decline in strength against presumptive Democratic presidential nominee Hillary Clinton has made Republicans anxious about his appeal outside the Republican base. GOP leaders have also worried that Trump’s brand of politics is toxic for the party at large and could damage them for elections to come. Already Democrats have sought to pin Trump’s controversial comments to down-ballot candidates locked in tough reelection bids around the country, which they hope could help them flip the Senate to Democratic control in November.

That has given serious pause to allies and donors who worry that Trump is unable and unwilling to curb his brash persona and bombastic style – which he would need to do to appeal to independent voters in a tough general-election bid against Clinton.

Word of Lewandowski’s departure Monday morning came as a surprise to members of the campaign and surrogates, who were not internally briefed about the shift before the news leaked to reporters. No staff-wide email detailing the shift or outlining the new organizational structure has been sent.

Stephen Stepanek, Trump’s campaign co-chairman in New Hampshire and a state representative who is close to Lewandowski, recalled spending time last Monday with Trump and Lewandowski during their visit to Manchester, New Hampshire. He did not sense any tension between the two. Stepanek said he, too, heard about Lewandowski’s departure through news reports and, as of an hour later, had not been told what the new campaign hierarchy would be.

“Corey was up here with Mr. Trump a week ago Monday, and as near as I could tell everything seemed fine,” Stepanek said.

Trump has faced a barrage of criticism in recent weeks for his clumsy response to the Orlando shooting. The morning after the massacre, Trump tweeted, “Appreciate the congrats for being right on radical Islamic terrorism.” In the days after the attack, Trump escalated his anti-Muslim rhetoric, accusing community leaders of failing to combat radicalization.

The real estate mogul has also grown increasingly isolated from the Republican establishment, particularly following his persistent attacks against a federal judge who is overseeing two cases against the for-profit Trump University. Trump has insisted that U.S. District Court Judge Gonzalo Curiel is biased and unfit to hear the case because of his Hispanic heritage. Those attacks drew a wave of criticism from Democrats and Republicans alike, and alarmed legal experts concerned that Trump lacks respect for judicial independence.

The missteps come amid a massive fundraising effort that would give the campaign a much-needed cash infusion ahead of the competitive general election fight against Clinton.

Members of the Trump family long ago soured on Lewandowski, according to someone close to the Trump campaign, and have urged their father to make a change.

“The kids do not like him, and they’re certainly happy with Manafort. Donald was Corey’s only supporter within Trump Tower,” this person said.

Gingrich said he was not startled by news that Trump had parted ways with Lewandowski.

“Surprise is too strong a word,” Gingrich said. “I thought sooner or later Trump would do whatever is necessary to get this thing on track.”

Gingrich added, however, that he had thought that Trump might not make the move until right before the convention. Gingrich said he expected further personnel moves but declined to specify what roles he was talking about.

Trump was scheduled to meet with key advisers and his family Monday, according to a report by Bloomberg News, to discuss his next moves.