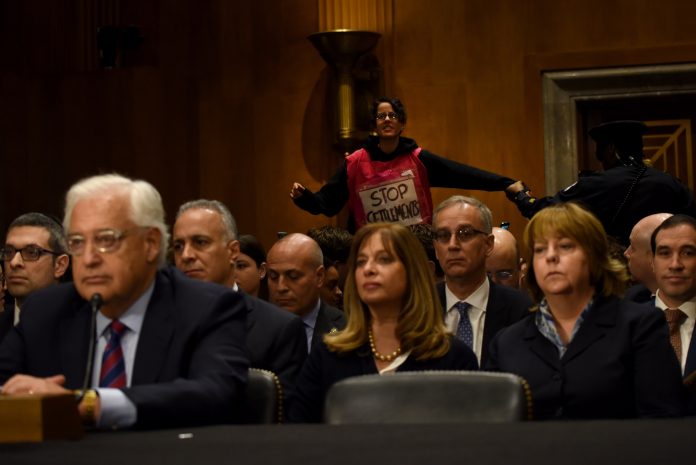 President Donald Trump’s choice to be the U.S. ambassador to Israel sought Thursday to assure skeptical senators that he can be fair-minded despite previous public statements doubting a Palestinian state and supporting Jewish home building in the West Bank.

“Some of the inflammatory language I used during the highly charged presidential campaign . . . has come in for criticism, and rightfully so,” New York lawyer and staunch Trump supporter David M. Friedman said.

“I regret the use of such language and I want to assure you that I understand the important difference between a political contest and a diplomatic mission,” Friedman said. “From my perspective, the inflammatory rhetoric used during the election campaign is entirely over and you should expect my comments to be respectful from now on.”

Asked about insults he lobbed at then-President Barack Obama, Sen. Chuck Schumer and others about support for the Iran nuclear deal that the Israeli government opposed, Friedman said he regrets them.

“There is no excuse. If you want me to rationalize it or justify it, I cannot,” Friedman said. “These were hurtful words and I deeply regret them. They are not reflective of my nature or my character.”

A pro-Palestinian demonstrator interrupted Friedman before he had finished his first sentence, and another followed after the nominee had introduced his family behind him.

“We are there, we will always be there,” the man shouted.

Friedman was asked to explain his views on whether he supports an independent Palestinian state as a peace settlement to decades of conflict between Israel and the Palestinians. On Wednesday, Trump had backed away from the presumption of two states as the goal of peace, saying he would back whatever structure the two parties decide is best.

Friedman had written that the goal of a sovereign Palestine is a “damaging anachronism,” but he suggested Thursday that the two-state idea could be viable if sought by both sides.

“I have expressed my skepticism solely on the basis of my perception of the Palestinians’ failure to renounce terror and accept Israel as a Jewish state,” he said.

He “would be delighted” to see a peace agreement on terms acceptable to both sides, he said. Later, he said he does not support Israeli annexation of the West Bank, which would preclude a separate Palestine.

He described his philanthropic support of an Israeli settlement in the West Bank as apolitical. A U.S. supporters group he heads has given money for education facilities, he said.

Asked about Trump’s statement that new settlements could hamper peace efforts, he said he agrees.

“It makes sense to tread very carefully in that area,” Friedman said.

Other senators noted the opposition to Friedman by five past ambassadors who served both Democratic and Republican presidents. Sen. Jeanne Shaheen, D-N.H., described the anguished reaction to Friedman from a Holocaust survivor, leaving Friedman looking stricken.

Over and over, he said he either retracts or regrets remarks and writings that place him at the extreme right of American Jewish thought, and often to the political right of Israeli Prime minister Benjamin Netanyahu.

Why, Corker asked, would Friedman go through that exercise?

Friedman answered slowly. The job of ambassador, he said, would be “the fulfillment of a life’s dream, of a life’s work, of a life of study of the people, the culture, the politics of Israeli society,” he said.

“My views are my views. Some of them – I recant certainly the rhetoric, the information, the hurt that I’ve caused. I need to do a much better job going forward.”

The hearing began with an acknowledgment from all sides that it was going to be contentious. Corker began by warning would-be protesters that he couldn’t keep them from being arrested.

Former Sen. Joseph I. Lieberman, I-Conn., helped introduce Friedman and urged colleagues troubled by Friedman’s past public positions to ask the nominee about them, but to keep an open mind.

Sen. Benjamin L. Cardin of Maryland, the top Democrat on the committee, read through a highlight list of some of Friedman’s most controversial statements, including likening a U.S. Jewish group to “kapos,” or Jewish Holocaust collaborators.

“I have questions about your preparedness for this position,” cardin said. “I am unsure of how an individual with your record will or can represent all Americans to all Israelis, or whether you are committed to long-standing U.S. policy for the two-state solution.”

The liberal group Friedman had attacked, J Street, is generally critical of Netanyahu, who visited the White House on Wednesday. The organization has been among the loudest voices opposing Friedman.

Friedman told senators he has profound disagreements with the group but regrets that he did not express them “respectfully.”

“Mr. Friedman is very passionate. He has said some things I don’t agree with, but I never doubt that he did it based on what he thinks was the right things to say at the time,” Graham said.