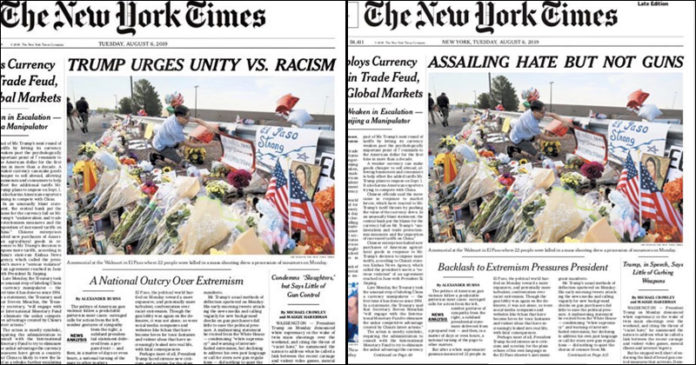 Donald Trump has praised the New York Times headline that was so heavily criticized that the newspaper was forced to pull it, the Daily Beast reports. The headline, which read “Trump Urges Unity vs. Racism,” was condemned by the president’s detractors and the paper’s Executive Editor Dean Baquet admitted to The Daily Beast on Tuesday that his newspaper had messed up. The print headline was changed in a later edition to “Assailing Hate, but Not Guns.”

Trump weighed in today, stating that the newspaper got it right first time. He wrote: “‘Trump Urges Unity Vs. Racism’ was the correct description in the first headline by the Failing New York Times, but it was quickly changed to, ‘Assailing Hate But Not Guns,’ after the Radical Left Democrats went absolutely CRAZY!” He then quoted a Fox News guest who said the NYT’s decision to change it was “an astounding development in journalism.”