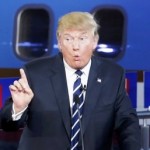 Republican presidential aspirant Donald Trump has finally revealed his favorite posuk in Tanach after telling an interviewer last month that he doesn’t want to say it because it’s “very personal.”

In an interview with Christian Broadcasting Network early this week, Trump said that the particular Biblical verse that resonates with him is about “envy” that comes from the “Book of Proverbs” – that’s Sefer Mishlei.

“There’s so many things that you can learn from it [The Bible]. Proverbs, the chapter ‘never bend to envy.’ I’ve had that thing all of my life where people are bending to envy,” Trump said.

There’s no such posuk.

The “never bend to envy” verse cannot be found anywhere in Mishlei or anywhere else in Tanach. Several pesukim do mention the word “envy.”

When the Washington Post asked what Trump meant, CBN reporter David Brody says the business mogul was actually referring to Mishlei 24:1-2: “Be not thou envious against evil men, neither desire to be with them. For their heart studieth destruction, and their lips talk of mischief.”

However, this posuk does not include the words “never,” “bend,” or “envy” as mentioned by Trump.

Nevertheless, while failing to successfully quote a posuk, Trump described the Torah as “special,” and even compared it to an “incredible movie.”

“You’ll see it once it will be good. You’ll see it again. You can see it 20 times and every time you’ll appreciate it more. The Bible is the most special thing,” he added.