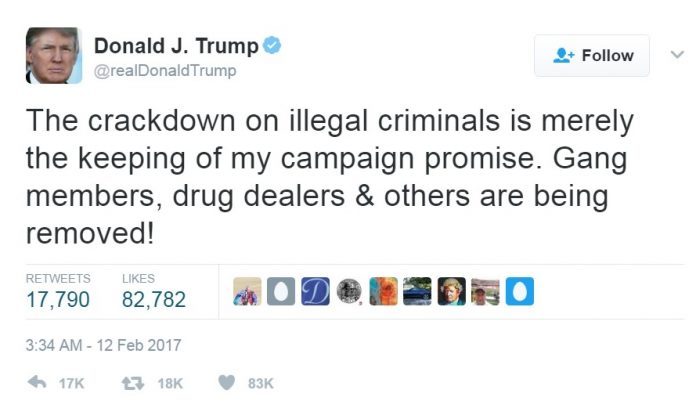 President Donald Trump this morning defended the large-scale raids of hundreds of undocumented immigrants by federal authorities over the past week as evidence that he is keeping his campaign promise.

Since Trump signed an executive order Jan. 25 cracking down on illegal immigrants, federal officials in recent days targeted immigrants – many of them known criminals – in homes and workplaces in half a dozen states, detaining hundreds of people.

Trump tweeted Sunday morning, “The crackdown on illegal criminals is merely the keeping of my campaign promise. Gang members, drug dealers & others are being removed!”

In another tweet sent a few minutes later, Trump decried the number of refugees from majority-Muslim nations that have been allowed into the United States since the federal courts halted enforcement of his travel ban.

Trump appeared to be referencing data from the State Department showing that just over 1,000 of the approximately 1,400 refugees admitted Feb. 4-10 were from the seven countries included in the travel ban.