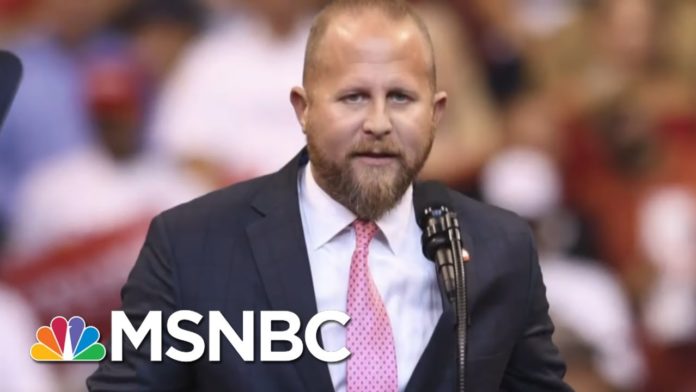 President Donald Trump announced Wednesday night that he is replacing campaign manager Brad Parscale with longtime political aide Bill Stepien as recent polls show him falling further behind Joe Biden in the presidential race amid a spreading pandemic that has devastated the economy.

The president wrote on social media that Parscale “who has been with me for a long time,” will stay as a senior adviser focusing on digital and data strategies. Parscale has been marginalized in the campaign for several weeks, officials said, with Trump angry about a botched rally in Oklahoma, where far fewer people attended than expected, and his lagging poll numbers.

Stepien was the field director for the 2016 campaign and has worked for the president since the election. He’s known for a low-key style in Trump world and his knowledge of battleground states. He was formerly a top aide to Gov. Chris Christie.

Trump told Stepien on Wednesday he was getting the job, a senior White House official said.

It’s unclear what the shake-up of campaign staff will achieve given that Trump often acts on his instincts and has show little interest in taking the steps political strategists say would help him win over undecided voters.

He continues to downplay the severity of the pandemic while deferring to local officials to mitigate the outbreak rather than seizing control of the situation. His reaction to the racial justice protests has increasingly been to inflame tensions by defending the police against calls for reform and embracing memorials to the Confederacy at a time when many are calling them monuments to racism not history.

Parscale publicly embraced the president’s approach to issues roiling the country and sought to become a prominent figure among Trump’s supporters.

At 6-foot-8 with a dramatic red beard, Parscale cuts a brash figure and is given to statements such as comparing the Trump campaign to the Death Star, a superweapon in the Star Wars movies.

His strength from the start of the 2016 campaign, in addition to his digital know how, was his close relationship with Trump’s older children. His firm, Parscale Strategy, bills for the campaign salary of Lara Trump and Kimberly Guilfoyle, the wife and girlfriend respectively of Trump’s two oldest sons, Eric and Donald.

Parscale’s standing with the president had been growing shakier since the spring, according to people close to the president who, like others, spoke on the condition of anonymity to describe the internal dynamics. The underwhelming rally in Tulsa, which failed to meet expectations Parscale had set for Trump, was broadly blamed on the campaign manager.

A senior Trump administration official said last week that Parscale “knows he screwed up” but that he maintained the trust of the Trump family.

The president, however, has been more vocal in his frustration with Parscale, and the campaign leadership had begun to shift, with Stepien and other advisers taking an increasing hand in strategy and messaging.

Some officials have questioned Parscale for regularly staying in Florida instead of working in Virginia, where the campaign is headquartered.

The president has also grown angry at times over how much money Parscale was making off the campaign, according to people familiar with the situation.

But the consensus was that the biggest blow he suffered in Trump’s eyes was over the Tulsa where Trump grew angry at the thousands of empty seats after Parscale heavily hyped the demand for tickets on social media.

Stepien faces a difficult challenge as Parscale’s replacement working for a president who has regularly disregarded campaign advisers recommendations and has seen his approval numbers fall due to his handling of the coronavirus outbreak and racial unrest across the country.

Stepien is expected to conduct an analysis of the campaign and could make changes in the coming weeks, according to people close to the campaign.

A politician who tends to keep his own counsel, Trump has filtered through a string of political advisers during his career and time in the White House. Trump fired Corey Lewandowski, the manager of his first presidential campaign, in June of 2016, at a similar point in the election cycle. The person elevated to take Lewandowski’s role, Paul Manafort, lasted about two more months before he resigned. He was replaced by Kellyanne Conway, who still advises Trump at the White House.

Trump’s new kitchen cabinet, a combination of White House and campaign employees led by White House senior adviser Jared Kushner, includes Stepien, and two communications aides from the 2016 campaign – Hope Hicks and Jason Miller, who was recently hired by the campaign and is increasingly seen as its principal strategist.

Miller and Stepien were talking with Trump almost every day in the week leading up to Trump’s pivotal July 3 speech at Mount Rushmore. Sometimes, Republican National Committee Chairwoman Ronna McDaniel and Chris Carr, the party’s political director, joined the conversations. Parscale, though, returned to his home in Florida after visiting Washington early in the week and continued to dial into conference calls, officials said.

Kushner for months had tried to protect Parscale, a close ally who he is viewed to control, but he is also seen as being close with Stepien.

Parscale was named campaign manager of the Trump reelection effort in early 2018, charged with building a data-driven, digital first campaign. People close to the campaign credited him with building a massive online fundraising operation early in the cycle.

He took an early public-facing role in the campaign, often addressing rallies before the president, having his name added as a “host” of high-dollar fundraising invites and even allowing the campaign to use his image in the first televised campaign ad that the campaign ran in 2020. In recent weeks, the campaign has advertised heavily through Parscale’s personal Facebook page, spending nearly $700,000 on spots that featured his name and image, in what campaign officials described as a successful test to increase the effectiveness of the advertising.

Trump struck in optimistic note about the presidential race ahead at the end of his message announcing the campaign shake up, although he wrongly claimed that polls were moving in his direction.

“This one should be a lot easier as our poll numbers are rising fast, the economy is getting better, vaccines and therapeutics will soon be on the way, and Americans want safe streets and communities!,” he wrote on Twitter.