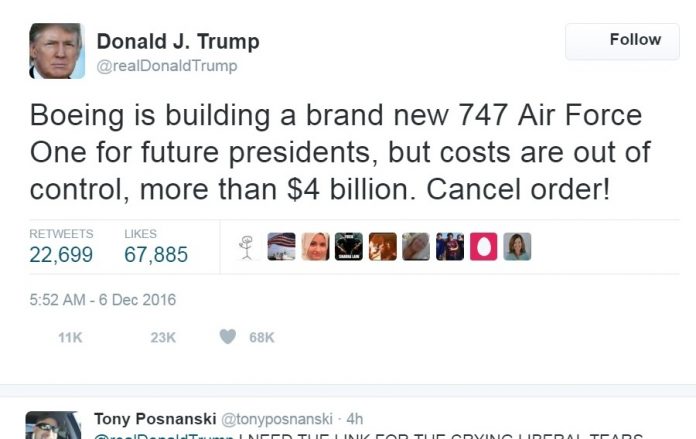 President-elect Donald Trump tweeted this morning that Boeing’s contract to build the next Air Force One should be canceled because of the high cost of the program.

“Boeing is building a brand new 747 Air Force One for future presidents, but costs are out of control, more than $4 billion. Cancel order!”

Boeing was selected as the manufacturer in January 2015, but it wasn’t much of a competition. Boeing’s 747-8 was the only plane made in the United States that could meet the requirements for the presidential aircraft while also being “consistent with the national public interest,” Air Force Secretary Deborah Lee James said in a statement at the time.

She insisted that the Pentagon “will insist upon program affordability through cost-conscious procurement practices.”

Talking to reporters Tuesday morning at Trump Tower in Manhattan, Trump explained his tweet: “The plane is totally out of control. It’s going to be over $4 billion for Air Force One program, and I think it’s ridiculous. I think Boeing is doing a little bit of a number. We want Boeing to make a lot of money, but not that much money.”

The Air Force and Boeing didn’t immediately respond to requests for comment.

Richard Aboulafia, an aerospace analyst with the Teal Group, said Trump’s tweet was “completely nonsensical and based on exactly nothing. But it’s very difficult to adjudicate on complicated program management and military requirements questions with Twitter as your medium.”

Loren Thompson, a defense consultant, said that “Air Force One has unique communications, safety and self-protection features so that the president can function under the most trying circumstances – like nuclear war.” The price tag, he said, “is driven by the demands of the mission.”

Boeing is under contract to build two planes to serve as Air Force One, said Todd Harrison, a defense analyst with the Center for Strategic and International Studies. “I think once [Trump] sees an actual Air Force One and the unique capabilities it is outfitted with he may start to understand why it is so expensive to replace,” Harrison said.

Air Force one is a symbol of presidential power at home and abroad. But it is also a “flying command post,” as Harrison said. “In the event of a nuclear attack, this is where the military will keep the president safe,” he said.

Trump’s tweet was reminiscent of when Sen. John McCain took aim at the fleet of presidential helicopters at the beginning of the Obama administration, saying in 2009, “I don’t think that there’s any more graphic demonstration of how good ideas have cost taxpayers an enormous amount of money.”

But Air Force One is different, Harrison said, because “it’s still very, very early. It hasn’t had a chance to have any cost overruns yet.” He said it was curious that Trump would single out Air Force One when there are so many other defense programs that have gone wildly over budget and behind schedule.

But this isn’t the first time Trump has highlighted the costs of Air Force One. In July, he objected to the use of the plane for campaign events: “Taxpayers are paying a fortune for the use of Air Force One on the campaign trail by President Obama and Crooked Hillary,” he tweeted. “A total disgrace!”

He brought it up again at a rally in North Carolina in July. “Now Air Force One is a very old Boeing 747,” Trump said. “It sucks up a lot of gas. A lot of fuel. Boy, the fuel bill. You turn on those engines, I can tell you, it’s a lot of money.”

Trump reported owning between $50,001 and $100,000 in Boeing stock in his most recent financial disclosure, which was filed in May 2016 and disclosed his 2015 holdings. It is not known whether he has bought or sold the shares since then. Boeing’s stock was down 0.64 percent in morning trading.