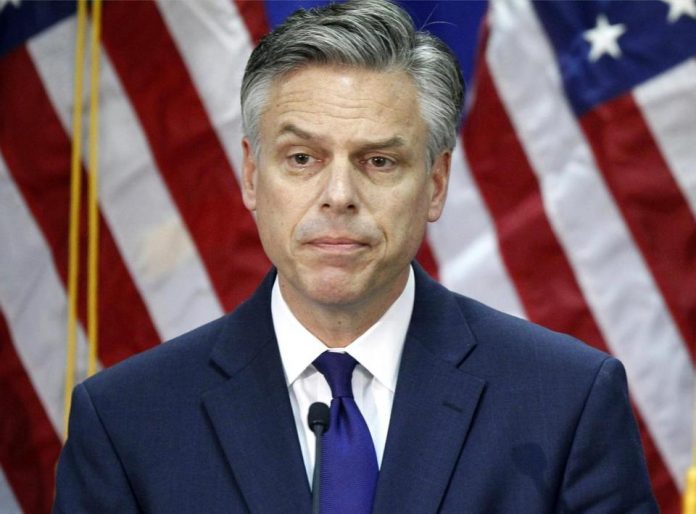 Former Utah governor and 2012 presidential candidate Jon Huntsman Jr. has been picked by President Donald Trump to be the U.S. ambassador to Russia, according to a White House official, a high-profile post at a time when relations between the two nations have become even more complicated and political than usual.

Trump has offered Huntsman the position, according to the official, who asked not to be identified because the position hasn’t been formally announced. The federal government has launched multiple investigations into Russia’s interference in the 2016 U.S. presidential election and potential contacts between Moscow and the Trump campaign.

During last year’s presidential campaign, Huntsman showed uncertainty about the eventual winner. After endorsing Trump in April 2016, he called for him to withdraw from the race in October 2016, following the release of an “Access Hollywood” video that showed Trump making sexually demeaning comments about women.

Huntsman is currently chairman of the Atlantic Council, an international affairs think tank.

The choice of Huntsman was reported earlier by Politico.

As was the case when he was sent to Beijing in 2009, Huntsman’s selection has political ramifications. Being dispatched to Moscow will almost certainly take him out of play as a 2018 primary challenger to 82-year-old Sen. Orrin Hatch of Utah in a potential race in which early polls show him way ahead of the incumbent.

Besides wanting to show bipartisanship, Obama’s team selected the Republican partly as a way to try to take him out of contention for a 2012 presidential bid. It didn’t work. Huntsman resigned the ambassadorship in 2011 and later launched a campaign for the White House, but the moderate candidate failed to gain traction in a Republican primary process that tends to reward conservatives.

In 2011, Huntsman had assets of $15.9 million to $71.3 million, according to a financial disclosure form he filed as part of his presidential bid. The bulk of his wealth comes from Huntsman Corp., the chemical company his father founded in 1970.

Its chemicals and adhesives have been used by a variety of companies, including by Boeing Co. for its 787 Dreamliner. Before the company went public in 2005, it was the world’s largest privately owned chemical producer.

The company, based in Salt Lake City and with an operations headquarters near Houston, runs manufacturing operations in Russia. In the past, Huntsman has divested himself of family business holdings when he has accepted ambassadorships to avoid conflicts of interest.

Huntsman has held various positions with the company throughout the years. He was hired as a consultant in August 2015 to help boost the company’s business in Asia, a Securities and Exchange Commission filing shows.

His duties, according to the document, included “development and continued maintenance of governmental and business relationships in developing economic regions, particularly in connection with markets and opportunities in India, China and Southeast Asia.”

The company said it would pay Huntsman $50,000 a month and as much as $200,000 in additional compensation “based on achievement of designated results as determined by the Board.” The consulting agreement was to expire on Aug. 31, 2016, although it could be extended for one-year terms.