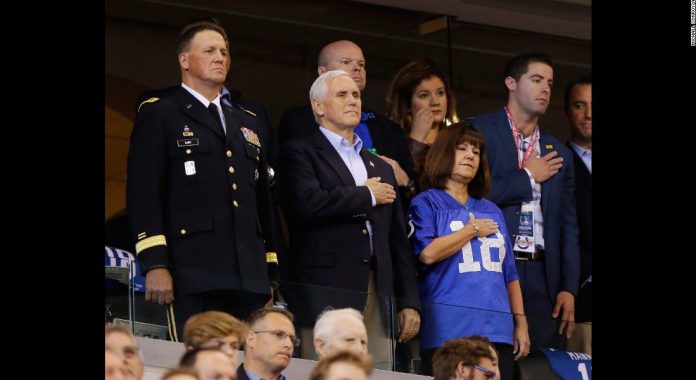 The plan had been for Vice President Mike Pence to attend the Indianapolis Colts game at which Peyton Manning’s number is to be retired, a gala celebration of the former Colts quarterback’s contributions to Pence’s home state.

The former governor of Indiana and his wife, wearing a Manning No. 18 jersey, left Lucas Oil Stadium after the national anthem, following instructions from President Donald Trump after a number of San Francisco 49ers players took a knee during the anthem.

“I asked @VP Pence to leave stadium if any players kneeled,” Trump tweeted. I am proud of him and @SecondLady Karen.”

Pence said he chose to leave because “we should rally around our Flag.”

“I left today’s Colts game because President Trump and I will not dignify any event that disrespects our soldiers, our Flag, or our National Anthem. At a time when so many Americans are inspiring our nation with their courage, resolve, and resilience, now, more than ever, we should rally around our Flag and everything that unites us,” he said in a statement. “While everyone is entitled to their own opinions, I don’t think it’s too much to ask NFL players to respect the Flag and our National Anthem. I stand with President Trump, I stand with our soldiers, and I will always stand for our Flag and our National Anthem.”

Pence’s response appears to have been triggered by the decision of between 15 to 23 members of the 49ers to take a knee during the anthem, as many NFL players have done to raise awareness of social injustice and racial inequality. Members of the Colts stood for the anthem with arms linked.