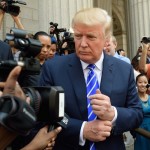 Donald Trump signed a pledge Thursday afternoon vowing not to seek a third-party bid under any circumstances and “endorse the 2016 Republican presidential nominee regardless of who it is.”

He promised it would be a binding agreement, saying in a press conference, “I see no circumstances under which I would tear up that pledge.”

The Republican National Committee asked every GOP presidential candidate to sign the pledge after Trump repeatedly threatened to run against the GOP in the general election if he lost the nomination contest. Read more at Politico.