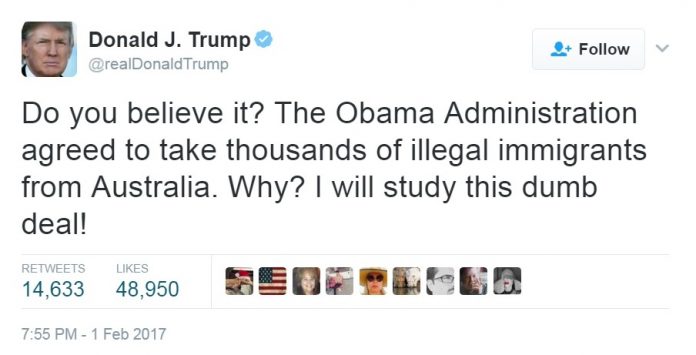 It should have been one of the most congenial calls for the new commander in chief – a conversation with the leader of Australia, one of America’s staunchest allies, at the end of a triumphant week.

Instead, President Donald Trump blasted Australian Prime Minister Malcolm Turnbull over a refugee agreement, according to senior U.S. officials briefed on the exchange.

At one point, Trump informed Turnbull that he had spoken with four other world leaders that day – including Russian President Vladimir Putin – and that “this was the worst call by far.”

“This is the worst deal ever,” Trump fumed as Turnbull attempted to confirm that the United States would honor its pledge to take in 1,250 refugees from an Australian detention center.

Trump, who one day earlier had signed an executive order temporarily barring the admission of refugees, complained that he was “going to get killed” politically and accused Australia of seeking to export the “next Boston bombers.”

Trump returned to the topic late Wednesday night, writing in a message on Twitter: “Do you believe it? The Obama Administration agreed to take thousands of illegal immigrants from Australia. Why? I will study this dumb deal!”

Trump’s treatment of Turnbull was particularly striking because of the tight bond between the United States and Australia, countries that share intelligence, support one another diplomatically and have fought together in wars including in Iraq and Afghanistan.

The official readout of his conversation with Turnbull said that the two had “emphasized the enduring strength and closeness of the U.S.-Australia relationship that is critical for peace, stability, and prosperity in the Asia-Pacific region and globally.”

A senior administration official acknowledged that the conversation with Turnbull had been hostile and charged, but emphasized that most of Trump’s calls with foreign leaders – including the heads of Japan, Germany, France and Russia – have been productive and pleasant.

The friction with Turnbull reflected Trump’s anger over being bound by an agreement reached by the Obama administration to accept refugees from Australian detention sites even while Trump was issuing an executive order suspending such arrivals from elsewhere in the world.

The issue centers on a population of about 2,500 people who sought asylum in Australia but were diverted to facilities off that country’s coast at Nauru and Manus Island in Papua New Guinea. Deplorable conditions at those sites prompted intervention from the United Nations and a pledge from the United States to accept about half of those refugees, provided they passed U.S. security screening.

Many of the refugees came from Iran, Iraq, Sudan and Somalia, countries listed in Trump’s order temporarily barring their citizens from entry to the United States. A special provision in the Trump order allows for exceptions to honor “a preexisting international agreement,” a line that was inserted to cover the Australia deal.

But U.S. officials said that Trump continued to fume about the arrangement even after signing the order in a ceremony at the Pentagon.

“I don’t want these people,” Trump said. He told Turnbull that it was “my intention” to honor the agreement, a phrase designed to leave the U.S. president wiggle room to back out of the deal in the future, according to a senior U.S. official.

Before Trump tweeted about the agreement Wednesday night, the U.S. Embassy in Canberra had assured Australian reporters that the new administration intended to take the refugees.

“President Trump’s decision to honour the refugee agreement has not changed,” an embassy spokesman had told the reporters, according to an official in the Sydney consulate. “This was just reconfirmed to the State Department from the White House and on to this embassy at 1315 Canberra time.”

During the phone conversation this past weekend, Turnbull told Trump that to honor the agreement, the United States would not have to accept all of the refugees but only to allow each through the normal vetting procedures. At that, Trump vowed to subject each refugee to “extreme vetting,” the senior U.S. official said.

Trump was also skeptical because he did not see a specific advantage the United States would gain by honoring the deal, officials said.

Australia is seen as such a trusted ally that it is one of only four countries that the United States includes in the “Five Eyes” arrangement for cooperation on espionage matters. Members share extensively what their intelligence services gather and generally refrain from spying on one another. There also is a significant amount of tourism between the two countries.

Trump made the call to Turnbull about 5 p.m. Saturday from his desk in the Oval Office, where he was joined by chief strategist Stephen Bannon, national security adviser Michael Flynn and White House press secretary Sean Spicer.