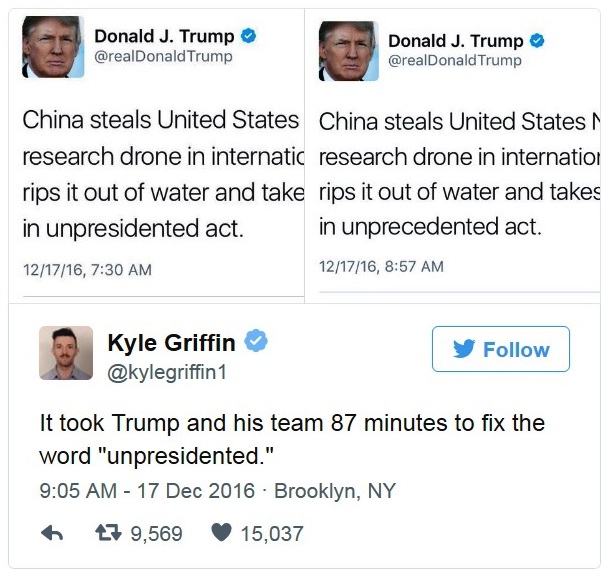 The first thing President-elect Donald Trump did on Saturday morning was send out a tweet escalating tensions with China. And he misspelled it. Senator Chris Murphy was one of many left dismayed by the tweet, linking to it with the caption, “This is madness. A 7:30am Saturday escalation of diplomatic crisis w China via Twitter, w misspelling.”

In a comment about China seizing a U.S. Navy drone in the South China Sea, Trump called the stunt an “unpresidented act,” a misspelling blunder that overshadowed the actual content of the tweet. It took Trump and his team more than an hour to correct the spelling to “unprecedented.” The full comment read, “China steals United States Navy research drone in international waters – rips it out of water and takes it to China in unprecedented act.” While the spelling got more attention than the tweet itself, Trump’s commentary serves as a reminder that he’ll be taking office with some bad blood for China. Throughout his campaign, he repeatedly vowed to take Beijing down a notch for what he described as currency manipulations meant to damage the U.S. His recent phone call with Taiwan’s leader exacerbated tensions further, a fact which has caused concern in some diplomatic circles. Read more at THE HILL.