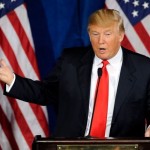 GOP presidential front-runner Donald Trump warned that the current stock-market bubble will eventually pop and plunge the nation into another recession.

Trump accused Federal Reserve Chairwoman Janet Yellen of keeping interest rates low in order to shield President Obama from having to leave office during a recession.

“She’s keeping the economy going, barely,” Trump told The Hill. “The reason they’re keeping the interest rate down is Obama doesn’t want to have a recession-slash-depression during his administration,” he said.

The Fed has kept its benchmark rate close to zero for almost seven years. In that time, U.S. stocks have nearly tripled from their financial crisis low. The Fed meets again next month and in December. In its rate decision, the Fed cited low inflation, weakness in the global economy and unsettled financial markets.

But don’t be fooled, Trump warns. The nation is on a path to financial disaster.

“You know who gets hurt the most? People who practice the American dream and did what should have been the right way — the people that went through 40 years of their life and saved a hundred dollars every week [in the bank],” Trump said.

“They worked all their lives to save and now what happens is they’re being forced into an inflated stock market and at some point they’ll get wiped out.”

He also slammed the 2010 Dodd-Frank Wall Street reform law as a “disaster” that has hurt economic growth.

“It’s terrible,” he said, vowing to “absolutely” repeal it. “Under Dodd-Frank, the regulators are running the banks,” Trump said. “The bankers are petrified of the regulators. And the problem is that the banks aren’t loaning money to people who will create jobs.”

Democrats have touted Dodd-Frank as essential taxpayer protections put in place five years ago to prevent a repeat of the 2008 financial crisis. The GOP says the 2010 act goes too far.

“We have Dodd-Frank and we’re in a bubble right now anyway,” he said. As an example, he cited social-media companies that he says have initial public offerings worth “billions” but “haven’t even made 10 cents.”