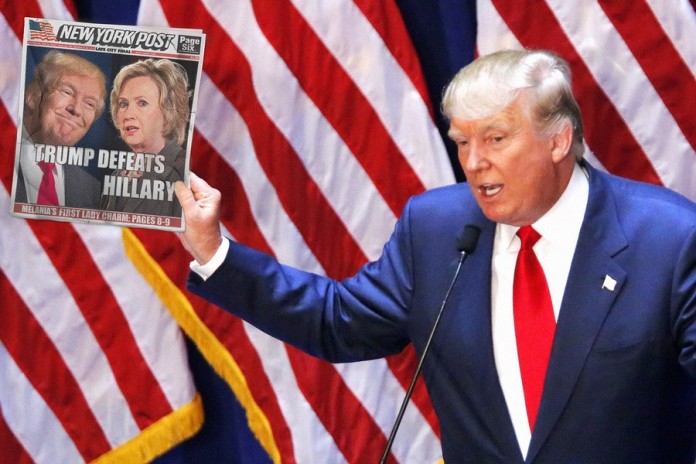 Trump not only took issue with the content of Clinton’s convention speech Thursday night, in which she directly called on voters to rebuke Trump’s vision of a diminishing United States, but he also mocked the way she delivered her speech. He called her speaking style “a very average scream.”

His tweet: Crooked Hillary Clinton made up facts about me, and “forgot” to mention the many problems of our country, in her very average scream!

And another: The media coverage this morning of the very average Clinton speech and Convention is a joke. @CNN and the little watched @Morning_Joe = SAD!

Trump also targeted several individuals who spoke at the convention, including former New York mayor Michael Bloomberg and Marine Gen. John Allen, both of whom spoke very critically of Trump during their speeches.

Bloomberg delivered a scathing rebuke of Trump on Wednesday, calling him a “dangerous demagogue” and blasting his business record.

“Trump says he wants to run the nation like he’s run his business. God help us. I’m a New Yorker, and I know a con when I see one,” Bloomberg said.

Another Trump tweet: General John Allen, who I never met but spoke against me last night, failed badly in his fight against ISIS. His record = BAD #NeverHillary

Allen, who delivered a forceful endorsement of Clinton on Thursday, indirectly attacked Trump’s support of enhanced interrogation tactics. Trump has often spoke in favor of waterboarding.

“With her as our commander in chief, our international relations will not be reduced to a business transaction,” Allen said. “I also know that our armed forces will not become an instrument of torture, and they will not be engaged in murder or carry out other illegal activities.”