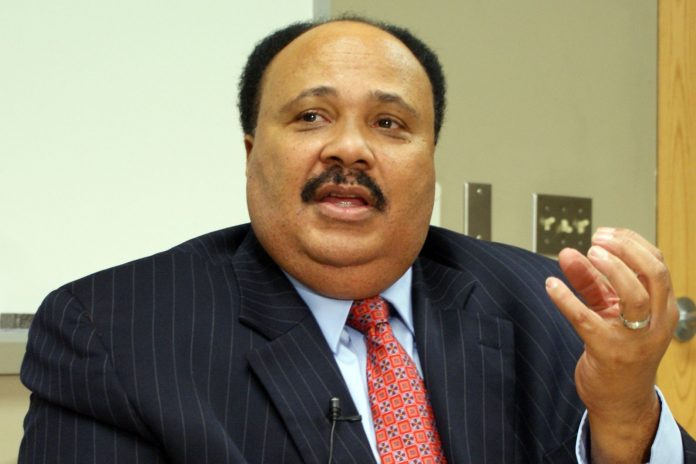 “Today, President-elect Trump is going to sit down with Martin Luther King III and others in New York and have a conversation about voting, about bringing more people into the system, the legacy of Doctor King and how we can continue to pursue that under the Trump administration,” Trump spokesman Sean Spicer said on NBC’s “Today” show Monday.

The private session at Trump Tower with civil rights advocates, on the same day the nation is honoring the Rev. Martin Luther King Jr.’s birthday, represents a mix of symbolism and substance. King III has campaigned for years to establish a form of free government photo identification that could make it easier for Americans who lack a driver’s license or other official ID to cast ballots. He and the other attendees, including the Rev. James A. Forbes, have urged Trump to endorse the idea of making such identification free.

But it also provides Trump, who is viewed largely in unfavorable terms by African Americans, with an opening to the black community. In national exit polling in November, black voters favored Hillary Clinton over Trump by a margin of 89 percent to 8 percent.

Trump tweeted Monday: “Celebrate Martin Luther King Day and all the many wonderful things that he stood for. Honor him for the great man that he was!”

Many African-American leaders see the distribution of a free government ID as a critical boost to low-income Americans who cannot open a bank account without one. The lack of an ID not only makes it more difficult to vote in several states, but it also often makes individuals dependent on check-cashing operations that charge high commissions.

King, who had urged the Obama administration to make a government photo ID ubiquitous, invited Trump on Jan. 8 to commemorate his father’s birthday by accompanying him on a visit to his memorial on the Mall. Instead, Trump’s aides suggested that they meet at Trump Tower.

All of the meeting attendees are affiliated with the Drum Major Institute, a progressive public policy think tank where King is president and Forbes is chairman. William Wachtel, a New York lawyer who co-founded the institute, and Scott Rechler, a board member who is the chief executive and chairman of RXR Realty, will also come to the session. Former U.N. ambassador and civil rights activist Andrew Young, who chairs the nonpartisan voting rights group Why Tuesday? and is chairman emeritus of the Drum Major Institute, was invited to attend but had a scheduling conflict.

In an op-ed published in The Washington Post , King noted that Trump won in states such as Pennsylvania, Michigan and Wisconsin, where minority turnout declined and stricter voter identification requirements may have deterred some minorities from voting.

“While we can’t know how those affected would have voted, we can agree that every citizen should have the unfettered opportunity to vote,” he wrote. “Indeed, my concern is not how people vote, but simply that they vote.”

According to the National Conference of State Legislatures, seven states have strict photo ID laws — voters lacking such identification can only cast provisional ballots – and eight have less stringent photo ID requirements.

King, along with Young, has proposed that the Social Security Administration place a photo on the cards they give every citizen or that the State Department waive the $55 passport fee for low-income Americans.

“Many people are concerned that our new president could undo much of what the outgoing president has achieved,” King wrote in the op-ed. “But in the area of voting rights, I am the opposite of concerned; I am hopeful in recognition that there is an opportunity to build a better system.”

Several prominent Democrats, including former presidents Jimmy Carter and Bill Clinton, have endorsed the idea. But some – such as Lewis – have argued that it might leave Americans more vulnerable to data theft. And libertarians, such as Sen. Rand Paul, R-Kentucky, also oppose a universal government ID.