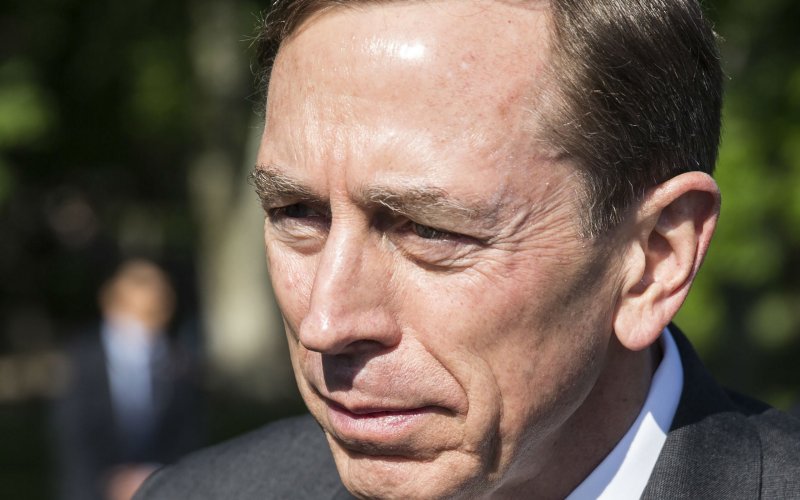 President-elect Donald Trump will meet today with retired Army Gen. David Petraeus, a possible alternative choice for secretary of state amid an escalating feud over the position between supporters of former New York mayor Rudolph W. Giuliani and 2012 GOP presidential nominee Mitt Romney, who will sit down with Trump on Tuesday.

As Trump’s senior advisers battled over who should fill what is considered the most prestigious Cabinet post, the president-elect will hold a second session with Romney along with another possible option, Sen. Bob Corker, R-Tenn., aides said Monday. Corker, who will visit Manhattan’s Trump Tower on Tuesday, chairs the Senate foreign relations committee and had suggested publicly that he was unlikely to be chosen.

But Trump is reportedly considering alternatives for Foggy Bottom as an extraordinary feud has broken out between those supporting Romney, a former Massachusetts governor considered the quintessential establishment Republican, and Giuliani, a fierce Trump backer seen by some as deserving the secretary of state post out of sheer loyalty. Romney attacked Trump in unusually harsh and personal terms during the presidential campaign.

The fight hit a fevered pitch over Thanksgiving weekend as Kellyanne Conway, Trump’s former campaign manager and now senior adviser to the transition team, took to the airways to attack Romney’s credentials to be the nation’s top diplomat. Conway is part of a cadre of Trump confidants who are waging an unusual public battle against Romney to influence the president-elect’s decision.

Another Romney opponent and influential Trump backer, Rep. Chris Collins, R-N.Y., blasted Romney on CNN’s “New Day” Monday as “a self-serving egomaniac who puts himself first, who has a chip on his shoulder, and thinks that he should be president of the United States.” Collins was among the first sitting members of Congress to endorse Trump during the campaign.

Others inside Trump’s orbit, particularly Vice President-elect Mike Pence, are viewed as Romney supporters, believing that he has a steady hand that would benefit Trump in the turbulent world of diplomacy, according to people familiar with the dispute who spoke on the condition of anonymity to discuss internal deliberations.

Trump was angered at Conway’s remarks, according to a report Monday on MSNBC’s “Morning Joe.” Trump aides declined to comment during a conference call with reporters, saying only that the president-elect is taking his time to choose the best possible candidate. Jason Miller, a senior Trump communications adviser, said Trump is meeting with Romney again because “the two, quite frankly, haven’t spent much time together, so this gives them a little more time to do so.”

The secretary of state search heated up as Trump resumed a busy schedule of transition meetings Monday at Manhattan’s Trump Tower after spending Thanksgiving weekend at his Florida estate. Among those dropping by today will be a candidate for Homeland Security secretary: Frances Townsend, a top homeland security and counterterrorism official in the George W. Bush administration. Another DHS contender – Rep. Michael McCaul, R-Tex., chairman of the House Homeland Security Committee – will meet with Trump on Tuesday.

Pence, who will participate in the meetings, entered the Trump Tower lobby Monday morning and paused in front of the elevators amid shouted questions from reporters, saying only: “It’s going to be a busy week. Get ready. Buckle up.”

Trump aides continued Monday to blast a pending recount effort in Wisconsin led by Green Party candidate Jill Stein that has been joined by Democrat Hillary Clinton’s campaign. Trump had spent Sunday ridiculing Clinton’s campaign over the issue, before ending his day on Twitter by parroting a widely debunked conspiracy theory that her campaign benefited from massive voter fraud.

“In addition to winning the Electoral College in a landslide, I won the popular vote if you deduct the millions of people who voted illegally,” Trump tweeted late Sunday, one of more than 10 tweets on the recount issue.

That accusation – spread by conspiracy sites such as Infowars.com and discredited by fact-checking organizations – gained traction among some conservatives disappointed that Trump lost the popular vote to Clinton, though he won the all-important Electoral College.

Miller, in the briefing, added: “I really do think it’s ridiculous that so much oxygen has been given to recount efforts when there is absolutely no chance of the election results changing. This election has been decided. It’s a conceded election.”

Petraeus, who has been taking a “wait and see” approach on joining the new administration, according to a U.S. military official who speaks with him often, has emerged as a possible alternative for secretary of state amid the battle over Romney.

The general is one of the most influential military officers of his generation, but ended his government career as director of the Central Intelligence Agency in November 2012 amid revelations that he had an affair with his biographer.

Petraeus pleaded guilty in April 2015 to a misdemeanor charge of mishandling classified information in connection with the scandal – namely sharing information with biographer Paula Broadwell – and was sentenced to probation and a $100,000 fine. He could face a tough Senate confirmation process because of that history, though he has since testified before the Senate Armed Services Committee as a foreign policy expert.

Conway over the weekend had led the remarkable rear-guard attack on Romney, arguing that he was disloyal to Trump and should not be considered to run the State Department. The remarks highlighted a fierce behind-the-scenes battle within the Trump camp over whether Romney should be offered the job as a healing gesture with the establishment or whether a loyalist such as Giuliani should get the nod.

Romney’s supporters have largely counseled Trump privately, while his opponents – Conway, former House speaker Newt Gingrich and a handful of other Trump loyalists – have gone public in recent days to stoke a revolt.

Those opposed to Romney have been advocating that Trump reward Giuliani with the secretary of state position, stressing his loyalty vs. Romney’s refusal to publicly say whom he voted for in the presidential race.

“I don’t think a cost of admission for party unity has to be the secretary of state position,” Conway said on ABC’s “This Week,” suggesting that Romney went too far in questioning Trump’s character and intellect during the presidential race. “There was the ‘Never Trump’ movement and then there was Governor Mitt Romney. He went out of his way to hurt Donald Trump.”

The Conway offensive, which began Thursday on Twitter and continued in her three television appearances Sunday, led the echo chamber of opposition to the former 2012 Republican presidential nominee. Gingrich said most Trump supporters could not countenance Romney’s selection for any high-profile posting in Trump’s new administration.

“I think we would be enormously disappointed if he brought Mitt Romney into any position of authority,” Gingrich said on Fox News.

But Pence is considered a Romney supporter. And the incoming White House chief of staff, Reince Priebus, also has a long-standing relationship with Romney since Priebus served as Republican National Committee chairman during Romney’s unsuccessful 2012 presidential bid.

Infighting over such a prominent position is not unusual. Four years ago, President Obama faced internal division over his choice to succeed Clinton as secretary of state, with one possibility being Susan E. Rice, who had been a longtime Obama confidant. Senate Democrats preferred their colleague John F. Kerry, and eventually Obama made Rice his national security adviser and gave Kerry the State Department.

But that internal Democratic feud played out in the traditional Washington manner – behind closed doors and in anonymous background quotes to news outlets. Today’s Republican battle has been carried out in an unusually public fashion that left some old Washington hands stunned and wondering whether this would be the new normal over the next four years.