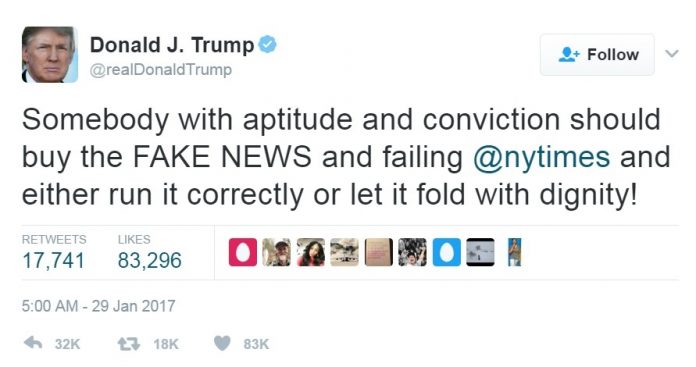 As a candidate, Donald Trump never showed much love for the New York Times. But as president, Trump seems to be openly wishing for its demise.

In a tweet today, Trump launched a high-explosive missile at the newspaper: “Somebody with aptitude and conviction should buy the FAKE NEWS and failing @nytimes and either run it correctly or let it fold with dignity.”

No matter that the tweet contained at least one error and unlikely scenario. As the Times itself pointed out Saturday, the paper isn’t “failing”: Its circulation and overall readership are at record levels (helped, no doubt, by its aggressive coverage of Trump). It’s also unlikely that anyone could simply buy the paper: The New York Times Co.’s stock is divided into two classes, with the controlling shares held by members of the dynastic Sulzberger family, which has shown little interest in selling in 120 years of ownership.

Such a sentiment, however, is unprecedented. Many presidents have criticized the “Gray Lady’s” coverage of their administrations, but none has publicly hoped for it to die.

The proximate cause of Trump’s latest attack was unclear. The Times’ Sunday front page carried several tough stories about Trump, including one about the “torrent of bogus claims” he made during his first week in office.

Trump himself didn’t offer any clues, and Timespeople said they were generally stumped. Asked for comment Sunday, Times editor Dean Baquet declined to respond at length. He noted, however, “The White House may see this as us versus them, but I see it as covering the news.”