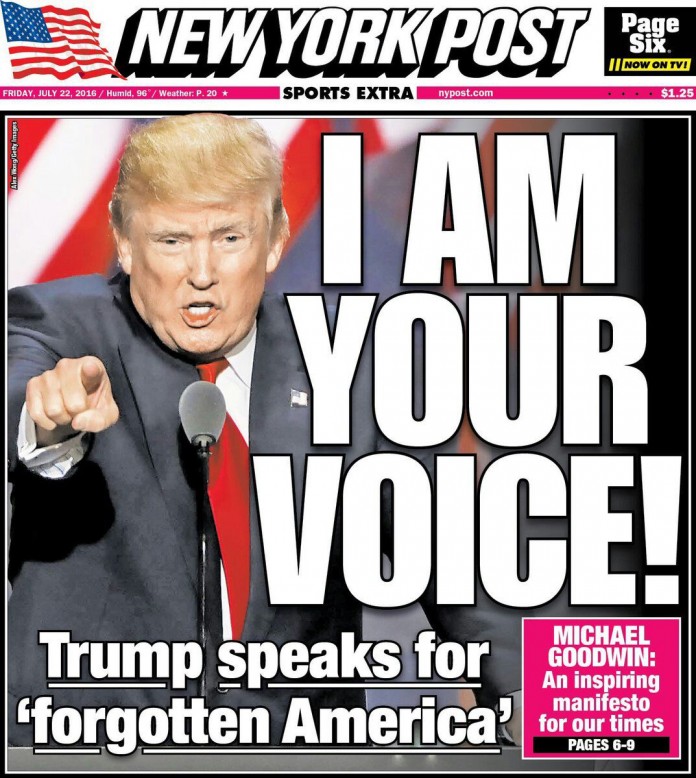 There were no echoes of Ronald Reagan’s “Morning in America,” George H.W. Bush’s “kinder and gentler nation” or even George W. Bush’s compassionate conservatism in Donald Trump’s speech accepting the Republican presidential nomination here Thursday night. Instead, in both theme and target audience, Trump offered a powerful echo of Richard Nixon almost 50 years ago.

Trump’s speech proved once again that he would continue to throw out the traditional campaign rulebook that might dictate softer language and broader appeals. Instead, he offered his grim portrait of the country and a law-and-order message in the hope of summoning an army of disaffected and forgotten voters large enough to topple the political status quo in November.

Throughout this election year, it has been evident that the forces of change are in control, which puts Trump’s Democratic rival Hillary Clinton at an obvious disadvantage. But with questions about his temperament and readiness to be president, Trump has but one way to win, and that was on display Thursday night.

In Nixon’s time, it was a call for the “Silent Majority” to rise up and take back the country. Trump spoke to the “forgotten men and women” who he said no longer have a voice in a rigged political system run by “censors” and “cynics.”

His target audience remains white, mostly working-class, Americans bruised by economic change and worried about cultural changes. But the coalitions that elected both Nixon and Reagan – that silent majority of 1968 or the Reagan Democrats of 1980 – have been diluted by demographic change. Trump’s gamble is that he can still find and mobilize enough of them to prove his critics wrong again.

Trump’s speech was the capstone to a chaotic convention that highlighted divisions within the Republican Party despite repeated efforts at unity this week. He spoke Thursday less as the leader of political party than as a man seeking to lead a crosscutting movement of fed-up voters.

“Every day I wake up determined to deliver for the people I have met all across this nation that have been neglected, ignored and abandoned,” he said.

He offered himself as a singular leader uniquely equipped to lead the country through the turmoil he described. His self-portrait was not that of someone eager to join forces with Republican majorities in Congress but that of a strong, even autocratic, leader who by sheer force of personality could deliver a dramatic national turnaround.

“Nobody knows the system better than me,” he said, “which is why I alone can fix it.”

He wrapped his message with a warning to those who did not take him seriously when he announced his candidacy 13 months ago. “Remember,” he said, “all of the people telling you you can’t have the country you want, are the same people . . . that said Trump doesn’t have a chance of being here tonight. . . . Oh we love to defeat those people, don’t we?”

The language he used was as dark and ominous as in any acceptance speech in recent memory, and what he promised to fix was a mess that he laid directly at the feet of Clinton, the former secretary of state and wife of former president Bill Clinton, as well as at the feet of President Barack Obama.

Running through a litany of problems in the Middle East that have happened over the past seven-plus years, Trump said of his rival: “The legacy of Hillary Clinton is death, destruction, terrorism and weakness.”

The speech was without question the most important Trump has ever delivered. Many of his speeches at political rallies have been carried live on cable networks, but none had either the setting or, likely, the audience Trump commanded on Thursday night. This was his opportunity to make a pivot to the general election, to begin to allay questions about his temperament as well as his understanding of a complex and dangerous world.

Trump was trying to rally a party badly fractured over his nomination and send reassurance to GOP leaders fearful that he begins the final months of the election with a campaign that is poorly organized and ill-prepared, highlighted by petty squabbles between Trump campaign officials and defeated rivals who won’t endorse him and the messy handling of charges of plagiarism in Melania Trump’s speech on Monday night.

Strains in the party have been visible all week in Cleveland and no more so than in Quicken Loans Arena on Wednesday night when Sen. Ted Cruz, R-Texas, addressed the convention. Cruz, who ran second to Trump in the primaries, again declined to endorse Trump and then urged people to “vote your conscience” in November for candidates “who you trust to defend our freedom and to be faithful to the Constitution.” He was greeted by boos and jeers from delegates loyal to Trump.

Another symbol of a conservative coalition in turmoil came hours before Trump’s speech with the news that Roger Ailes, the founder and chief executive of Fox News, was resigning under pressure. No outside institution has been more important to maintenance of the Republican coalition and the conservative movement as it now exists than Fox News. The timing of the news added an unexpected exclamation point to a week of surprises inside the party family.

Paul Manafort, Trump’s campaign manager, had promised earlier in the week that Trump would campaign on a theme of law and order, a theme that was largely unspoken through much of the early months of Trump’s candidacy.

On Thursday, Trump embraced that message in the opening minutes of his speech, asserting that this is a “moment of crisis” for the country that threatens “our very way of life.” He painted a picture of an America out of control, with rising crime in big cities, police being shot and illegal immigrants streaming across the border.

He described an economy in which household incomes are down since the beginning of the century, persistent poverty, especially among African Americans and Latinos, a “trade deficit of $800 billion” and a national debt at $19 trillion. Internationally, he ticked through what he described as a series of humiliations for America’s prestige that have left the Islamic State on the rise and allies doubting the country’s resolve.

His speech was long on pledges, shorter on how he would fulfill them. He promised again to “defeat the barbarians of ISIS” but without resolving the long-standing question of whether he could do so without committing significantly more U.S. forces to the battle.

He pledged millions of new jobs and trillions of dollars of new wealth. After pointing to the national debt as a problem that needed to be addressed, he promised significant tax cuts and a massive infrastructure project that would build new “roads, highways, bridges, tunnels, airports and the railways of tomorrow.”

He brought special emphasis to the core messages of his presidential campaign: trade and immigration. He pledged to build “a great border wall” and to negotiate trade deals that are fair to American workers. He called trade “a signature message” of his campaign and one that would be “a signature feature of my presidency.”

Trump said the answer to the problems he outlined is a policy of putting America first. “Americanism, not globalism, will be our credo,” he said. Government would be run not for elites but for those left out or left behind who no longer have a voice. To them he declared, “I am your voice.”

Trump proved during the primaries that there is a sizable audience for his harsh critique of the status quo and receptivity to a candidate who pledges strength and firmness above all else. That was enough to win the nomination. His Thursday night speech significantly raised the volume on that message.