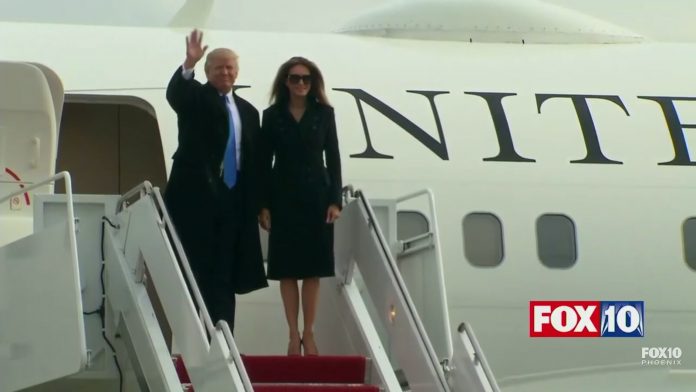 Donald Trump touched down today at Washington’s Joint Base Andrews, about 24 hours before he will be sworn in as the 45th U.S. president.

Trump traded his personally branded Boeing 757 for a U.S. Air Force version of the same plane, following the custom of a first flight to the nation’s capital aboard a military plane. The president-elect will participate in a series of pre-inaugural rituals and celebrations, beginning with a reception at the Trump International Hotel he opened in downtown Washington last year. The events are a run-up for his swearing-in at about noon on Friday.

“It is going to be a very humbling and moving day for the president-elect, his family and mine,” Vice President-elect Mike Pence said at a briefing for reporters on Thursday. “We are ready to go to work. In fact, we can’t wait to get to work for the American people.”

In the afternoon Thursday, Trump will travel to Arlington National Cemetery, where he and Pence are expected to lay a wreath at the Tomb of the Unknown Soldier as part of a ceremony honoring veterans.

They’ll then cross the Potomac for a welcome ceremony on the steps of the Lincoln Memorial, which will feature performances from artists. Trump and Pence are both expected to address their supporters, and other celebrities like John Voight are expected to attend.

Trump has dismissed criticism that his inaugural events are light on talent.

“Many of the celebrities that are saying they’re not going, they were never invited,” Trump said in a Fox News interview on Wednesday. “I don’t want the celebrities, I want the people, and we have the biggest celebrities in the world there.”

Later in the day, Trump, Pence and their spouses are expected to attend a black-tie inaugural dinner at Union Station. The main entrance to the transit hub was shut down in the morning in preparation for the event.

Trump is expected to stay in Washington overnight ahead of Friday’s inauguration. He and his wife Melania will have morning tea at the White House with President Barack Obama and first lady Michelle Obama before heading to Capitol Hill for the swearing-in.

The Senate will confirm at least two of Trump’s Cabinet secretaries Friday afternoon, Senate Democratic Leader Chuck Schumer said Thursday. They include retired Marine Corps general James Mattis, who has been nominated to lead the Defense Department, and retired Marine Corps gGeneral John Kelly, who will lead the Homeland Security Department. The first piece of legislation Trump signs into law may be a bill allowing Mattis to serve in the civilian position, which is required before he is confirmed.

Spicer has said Trump will remain at the White House over the weekend, and his administration will begin in earnest on Monday with a series of executive orders and actions.