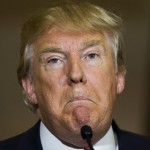 During a segment on The Hugh Hewitt Show Thursday, Donald Trump was asked if he was familiar with General Qasem Suleimani, the leader of Iran’s Quds Force.

He began his response saying “The Kurds, by the way, have been horribly mistreated by…,” mixing up Quds with Kurds.

Trump was later upset that Hewitt was asking “gotcha” questions. “I will be so good at the military, your head will spin,” he continued. ”But obviously, I’m not meeting these people, I’m not seeing these people.” Read more at The Hill.