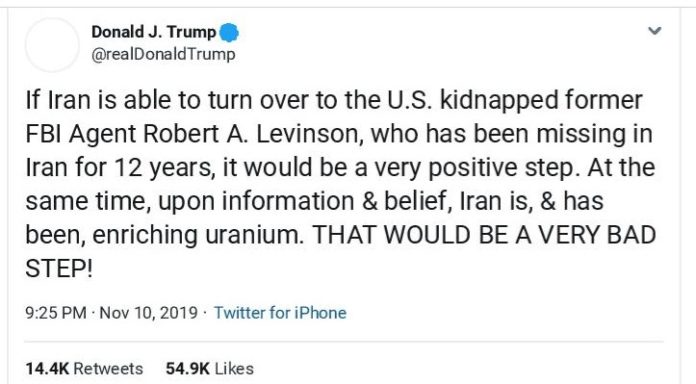 President Trump took to Twitter late Sunday to urge Iran to release the retired FBI agent who had been missing in the country since 2007 and said it would be a very positive step toward easing tensions between the two countries since provocations on the Strait of Hormuz.

Robert Levinson’s disappearance has been the source of intrigue. He vanished during an unauthorized CIA mission. Iran acknowledged on Sunday that there is an open Revolutionary Court case involving Levinson.

“If Iran is able to turn over to the U.S. kidnapped former FBI Agent Robert A. Levinson, who has been missing in Iran for 12 years, it would be a very positive step,” Trump tweeted.

If Levinson is alive, he would be the longest-held prisoner in U.S. history.