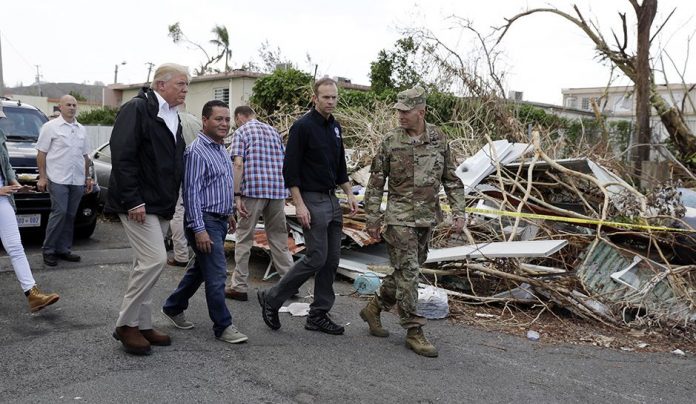 President Donald Trump arrived in Puerto Rico on Tuesday and began his visit with a briefing on Hurricane Maria’s damage in the company of the San Juan mayor he insulted on Twitter.

“It’s a beautiful place,” Trump said. “Every once in a while you get hit. And you really got hit. No question about it.”

He shook hands with San Juan Mayor Carmen Yulin Cruz, who told him, “it’s not about politics.” After she criticized Acting Homeland Security Secretary Elaine Duke over the weekend for calling the federal response to Puerto Rico a “good news story,” Trump maligned “politically motivated ingrates” in the territory on Twitter.

At a briefing with local officials in an airport hangar, he suggested the federal commitment to the disaster had already complicated the budget.

“I hate to tell you, Puerto Rico, but you’ve thrown our budget a little out of whack — because we’ve spent a lot of money on Puerto Rico and that’s fine, we’ve saved a lot of lives,” Trump said.

He also suggested the 16 deaths on the island so far officially attributed to the hurricane indicated a better response than George W. Bush’s handling of Katrina in 2005.

The natural disaster has exposed Trump’s inexperience at governing and raised questions about his ability to handle a major crisis.

Trump’s visit offers a chance to show his commitment to rebuilding an island that remains almost completely without power and short on food, water, medicine and other supplies nearly two weeks after Hurricane Maria. The trip, along with one on Wednesday to Las Vegas after a mass shooting there, poses a test of his capacity to fulfill the president’s traditional role of uniting the country in moments of tragedy.

Puerto Rico’s governor, Ricardo Rossello, and Kenneth Mapp, the governor of the U.S. Virgin Islands, which were badly damaged by Hurricane Irma, will also meet with Trump during his visit.

Cruz said in a statement Tuesday that she had accepted the White House’s invitation to attend the briefing, at a National Guard base on Puerto Rico, and would stress to the president that “this is about saving lives, not about politics; this is also about giving the people of Puerto Rico the respect we deserve; and recognizing the moral imperative to do both.”

As Trump left Washington for the trip, he was unabashed in boasting about the federal response, describing the effort as “incredible” and comparing it favorably with aid after hurricanes in Texas and Florida.

“In Texas and Florida we got an A-plus, and I’ll tell you what, I think we’ve done just as good in Puerto Rico, and it’s actually a much tougher situation,” Trump told reporters outside the White House. “Now the roads are clear, the communications are starting to come back.”

On the ground in Puerto Rico, 93 percent of homes still lacked electricity as of Tuesday and less than a quarter of the population had cell phone service. The president waited eight days to waive restrictions under the Jones Act that limit which ships can deliver relief supplies, and he also was criticized for tweeting more about football players kneeling during the national anthem in the days after the storm than about the crisis on Puerto Rico.

The bankrupt territory’s recovery stands to be long and expensive, with serious implications not just for Puerto Rico’s residents but also its bondholders, U.S. taxpayers and perhaps even Trump’s political prospects. Puerto Rico’s $74 billion of debt cripples its ability to raise money on its own.

One potential outcome, should rebuilding bog down, is that some of the island’s 3.4 million residents, who are American citizens, could relocate en masse to Florida and other mainland states. Even before the storm, Puerto Rico’s fiscal plan released in March projected that the island’s population would decline by 0.2 percent a year during the next decade.

Oxfam, which rarely responds to disasters in the United States and other wealthy countries, said Monday that it would start work in Puerto Rico amid “the slow and inadequate response the US Government has mounted,” said Oxfam America’s president Abby Maxman. “The US has more than enough resources to mobilize an emergency response” but “has failed to do so in a swift and robust manner.”