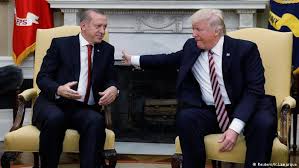 President Trump hosted Turkish President Recep Tayyip Erdogan Tuesday afternoon, and both men had warm messages to share even as the two countries clashed last week about a decision by the United States to arm Kurdish fighters in Syria.

Trump spent much of his statement complimenting the Turkish military.

“Turkish courage in war is legendary,” said Trump, mentioning Turkish contributions in the Korean War specifically. “Today we face a new enemy in the fight against terrorism and again we seek to face this threat together.”

Still, the Turkish president made it clear the Trump administration’s decision to arm one group of Syrian Kurds fighting the Islamic State, the YPG, would “never be accepted.”

Erdogan called Trump his “dear friend” and made a point to congratulate the U.S. president on his “legendary triumph” over Hillary Clinton in the 2016 presidential election. Trump said it was a “great honor” to host Erdogan. Read more at NPR.