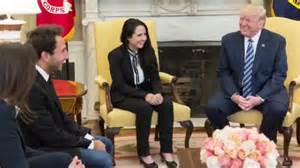 President Donald Trump has welcomed an Egyptian-US charity worker, whom he helped release after nearly three years detained in Cairo, to the White House.

The president said he was “very happy” that Aya Hijazi, 30, was flown back to the US on Thursday night.

“We are very happy to have Aya back home,” Mr Trump said on Friday at the White House. “It’s a great honour to have her in the Oval Office with her brother.” Read more at BBC.